As end nears, Gaddafi offers $400 per family to stop the uprising 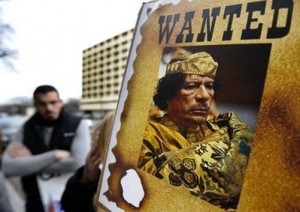 Libyan state television said Moammar Gadhafi’s government was raising wages, increasing food subsidies and ordering special allowances for all families, in its first practical attempt to win the support of citizens since the uprising began.

Each family will receive 500 Libyan dinars ($400) to help cover increased food costs, and wages for some categories of public sector workers will increase by 150 percent, the television station said.

The concessions came as social media sites called for for mass demonstrations in Tripoli after Friday prayers.

The U.N.’s top human rights official said Friday there are reports of mass killings of thousands in Libya that should spur the international community to “step in vigorously” to end the crackdown against anti-government protesters.

U.N. High Commissioner for Human Rights Navi Pillay implored the U.N. Human Rights Council to use “all means possible” to establish an independent panel to investigate the alleged abuses by Libyan security forces and hold those responsible to account.

The U.N. Security Council was also due to meet Friday to discuss a draft proposal for sanctions against Libyan leaders.

Government forces are fighting rebels for cities near the capital. Gadhafi’s troops control Tripoli after cracking down on anti-government protests several days ago. Residents say they are staying indoors unless forced to search for supplies.

The New York-based Human Rights Watch has put the death toll in Libya at nearly 300, according to a partial count. Italy’s Foreign Minister Franco Frattini said estimates of some 1,000 people killed were “credible.” French estimates suggest some 2,000 people may have died.

Gadhafi’s response to the uprising in his country has been the harshest by any Arab leader in the wave of protests that has swept the Middle East recently, toppling the presidents of Libya’s neighbors Egypt and Tunisia.

In Brussels, NATO also planned to hold an emergency meeting Friday to consider the deteriorating situation in Libya. It had received no requests to intervene said it would only do so if it were given a United Nations mandate.

French Foreign Minister Michele Alliot-Marie said France and Britain would press the Security Council for a “total embargo on weapons as well as sanctions, and also the referral of a case to the International Criminal Court for crimes against humanity.”

The Security Council rarely does so, but ordered an investigation into crimes in Darfur in 2005.

“This regime in Libya is lashing out madly, it is waging war against its own people,” German Foreign Minister Guido Westerwelle said in an interview with WDR radio Friday. “We cannot accept that, so the U.N. Security Council must once again consider this situation urgently, and we must now approve sanctions together.”

Westerwelle said possibilities include barring entry to members of the ruling family and freezing assets.

The EU’s foreign policy chief Catherine Ashton also said the Security Council must “take action” and the EU bloc should consider imposing travel restrictions and asset freezes to achieve a halt to the violence there and move toward democracy.

The United States is considering a larger sanctions package that might include asset freezes and travel bans on senior Libyan officials, or a ban on the sale of U.S. military equipment.

Foreign governments focused on evacuating thousands of their citizens trapped by the unrest.

Hundreds of Americans and other foreigners were stuck on a ferry for a third straight day, unable to leave due to rough seas, while high winds affected the takeoff of Turkish military planes involved in the evacuation effort.

The U.S. State Department said in a post to Twitter that 167 U.S. citizens and 118 citizens of other countries were on the ferry. It would take at least six hours for it to reach Valetta, Malta.

After decades of shunning Gadhafi, accusing him of supporting anti-Western militant groups around the world, the Western powers had in recent years embraced the flamboyant leader with a penchant for flowing robes and female bodyguards.

Gadhafi was particularly reviled after the 1988 Pan Am airliner bombing over Lockerbie, Scotland. A defecting minister said this week he had evidence Gadhafi did order the attack, in which 270 people were killed.

His ending of some weapons programs and cutting of overt ties with international militants, especially following the U.S. overthrow of Iraq’s Saddam Hussein in 2003, led to cooperation with Western companies on developing oil fields.