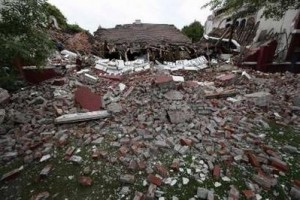 Christchurch has always concealed a deadly secret under its quaint English-style gardens and historic center of stone buildings and Tuesday’s killer earthquake will leave it permanently altered.

Mayor Bob Parker, a popular former television presenter with close-cropped white hair, said still-stunned locals would not abandon New Zealand’s second-largest city, but it may be a dramatically different Christchurch that emerges from a reconstruction tipped to cost upwards of $12 billion.

Known as the Garden City and popular with local honeymooners and overseas tourists as a gateway to the spectacular South Island, Christchurch was unwittingly located near a bend between continental plates by its early settlers.

That bend, and an equally shallow water table just below the surface, delivered not only the second large quake in just six months, but churned the ground into a soup that swallowed roads and cars, and further weakened damaged buildings.

“We may have to level entire blocks in some places. We are not going to walk away from this place,” Parker said.

Gary Gibson, from the School of Earth Sciences at Australia’s University of Melbourne, said New Zealand straddled the tectonic boundary between the Pacific Plate and the Australia-India Plate.

Christchurch is not itself on the boundary, but close to secondary faults that radiate out from a kink to the north of the city.

“All earthquakes in the Christchurch region will be shallow, so the effect of a given earthquake will be worse than from a deeper plate boundary earthquake of the same magnitude,” Gibson said.

That geological curse poses an ongoing threat to a region that accounts for about 15 percent of both New Zealand’s GDP and its 4.4 million population.

The rebuilding has added urgency because of the city’s key role in the looming Rugby World Cup, kicking off in September, which aims to draw fans from across the world to a country where fervor for the game is quasi-religious.

Parker said urban planners would need to look to other quake-prone cities like San Francisco for lessons on how to rebuild more safely and fight the geology underneath, which did not come into the minds of mid-19th century settlers.

“History has shown we will get over this, traumatic as it is, in fact it will strengthen us,” he said.

The World Cup, Parker said, would create a short-term challenge, but the city would be ready to host thousands of foreign tourists within months, provided they were willing to come.