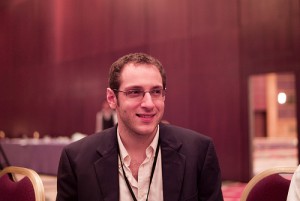 His ArabNet RoadShow team, based in Beirut, travelled by bus to six countries in the Middle East and North Africa, where they held workshops to support entrepreneurs to start their own companies.

A local partner in each country associated with the web and entrepreneurship community is chosen to host the workshop and spread the word.

In Dubai, DIC helped turn the roadshow into one of their “start-up” programmes.

“They’re amazing as a local partner,” Mr Christidis said. “They helped us with the marketing and the local people and they support start-ups.”

“After that success, a lot of people who were interested couldn’t come to Beirut so we started the roadshow,” he said. “Someone from the MBC group reached out to us and recommended us to DIC because they are interested in doing more on entrepreneurship in the technology sector.”

The Middle East Broadcasting Centre Group is the first private free-to-air satellite broadcasting company in the Arab World and is based in Dubai Media City.

ArabNet’s second conference will take place next month in Beirut, and the company will be back in Dubai in December.

“We also started discussing DIC becoming a partner in Beirut with us,” said Mr Christidis, adding that the UAE was an important hub for entrepreneurship and technology.

“DIC helped out with outreach through their communication channels and access to the media,” he said. “We were thrilled with how things went and I believe it was a great opportunity for those experienced entrepreneurs to connect with serious investors who could help them to grow their business.”

By Caline Malek, The National