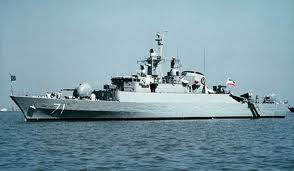 Two Iranian naval vessels have submitted a request to transit the Suez Canal, Egypt’s Foreign Ministry said Thursday. Israel has expressed concerns over the plans, labeling them a “provocation.”

Ministry spokesman Hossam Zaki said Egyptian authorities have received the request to grant the vessels passage, while a Suez Canal official said the Defense Ministry would process the application.

In Tehran, Iran’s official English-language Press TV cited an Iranian naval official saying the two warships are to pass through the canal. The official said Tehran was in contact with Egypt about the ships.

Earlier, a canal official had said the Iranians had withdrawn a request to transit the waterway, without giving an explanation for the application’s withdrawal. The official spoke on condition of anonymity because he was not authorized to brief the media.

It was not immediately clear why there were contradictory reports over the transit request.

Earlier, a canal official had said the Iranians had withdrawn a request to transit the waterway, without giving an explanation for the application’s withdrawal. The official spoke on condition of anonymity because he was not authorized to brief the media.

Ahmed al-Manakhly, a senior Suez Canal official, said international agreements regulate the traffic through the canal. He said that only in the case of war with Egypt may vessels be denied transit through the waterway.

Al-Manakhly noted that Iran and Egypt are not at war, and said the final decision on whether to grant the vessels’ passage lies with the Defense Ministry.

He said he will not allow any warships to transit the canal without approval from the Defense Ministry.

The Suez Canal official identified the two vessels as the Alvand, a frigate, and the Kharq, a supply ship, and said they were en route to Syria. He said they were now in an area near Saudi Arabia’s Red Sea port of Jiddah.

Syria’s official news agency carried a statement Thursday from Iran’s ambassador to Syria, who said the two Iranian warships plan to travel to Syria for training and that the visit would be “carried out according to international laws and norms.”

Israeli Foreign Minister Avigdor Lieberman said Wednesday that Iran was about to send two naval vessels through the Suez Canal for the first time in years, calling it a “provocation.”

Israel considers Iran an existential threat because of its disputed nuclear program, ballistic missile development, support for militants in the region and its threats to destroy Israel. While Israel has pressed for international sanctions to stop Iran from developing nuclear weapons, it has not taken the possibility of a military strike off the table.

On Wednesday, U.S. State Department spokesman P.J. Crowley confirmed the presence of the two Iranian ships in the area of the canal but would not say whether that was considered provocative.

“There are two ships in the Red Sea,” he said, “What their intention is, what their destination is, I can’t say.”

Vessels intending to transit the canal, which links the Red Sea and the Mediterranean, must give the waterway’s authority at least 24-hour notice before entering the canal.

Only ships that don’t meet safety requirements are banned from using the canal.

In the case of naval vessels, clearance from the Egyptian defense and foreign ministries is required in advance, but is rarely withheld. AP