Thronged with protesters, tanks and a makeshift peace encampment, it was the epicentrre of a revolt that captivated the world.

Today, the barricades in Cairo’s Tahrir Square finally fell and the tents were swept away. Life in the Egyptian capital began to return to a tentative order, though one broken by a strike by civil servants.

Liberation Square itself was full of the usual hum of traffic and had been stripped of the last debris. Cars threaded around the central island which had once been home to the impromptu encampment. 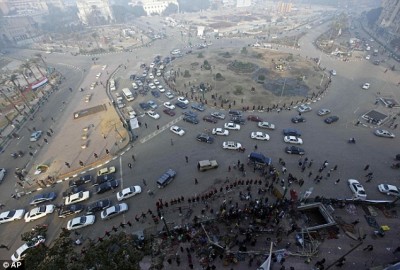 Several hundred strikers from the state Youth and Sports Organisation gathered in a corner of the vast public space.

But compared to the tens of thousands who had staged 18 days of demonstrations, this was relatively small scale

Elsewhere in the city, thousands of others took to the streets to demand better pay and conditions.

The Central Bank of Egypt ordered banks across the country closed following a strike by staff of the National Bank, the largest state bank.

The military council ruling Egypt says security and a return to normal are among its priorities.

But there was little peace across the rest of the Middle East, where protest has leapt from country to country in the wake of January’s Jasmine Revolution in Tunisia.

In BAHRAIN at least 14 people were injured after protesters clashed with police on a Day of Rage.

Helicopters circled over the capital Manama, where protesters were due to gather later in the day, and security forces tightened their grip on Shi’ite communities.

At least 14 people were wounded in clashes in three villages overnight and on Monday. Police broke up one protest with teargas and rubber bullets.

Bahrain, where a Sunni family rules over a Shi’ite majority, has offered cash payouts in the run-up to the protest, in a move that appears to be aimed at preventing Shi’ite discontent from bubbling over as popular revolts spread in the Arab world.

In the village of Diraz, authorities dispersed with teargas about 100 Shi’ite protesters who had squared off with police, shouting slogans demanding more political rights.

‘We don’t want to overthrow the ruling family, we just want to have our say,’ said Ali Jassem, married to a daughter of Sheikh Issa Qassem, a powerful Bahrain Shi’ite cleric.

Diplomats say Bahrain’s demonstrations, organised on Facebook and Twitter, will gauge whether a larger base of Shi’ites can be drawn to the streets. The big test will be if protests take hold in Manama, where demonstrations are rare.

In ALGERIA, the government said that a 19 year-long state of emergency would be ended within days.

Foreign Minister Mourad Medelci said on Monday, brushing off concerns that recent protests in the country could escalate as in Tunisia and Egypt.

A state of emergency has been in force in Algeria since 1992 and the government has come under pressure from opponents, inspired by uprisings in Egypt and Tunisia, to ditch emergency laws. 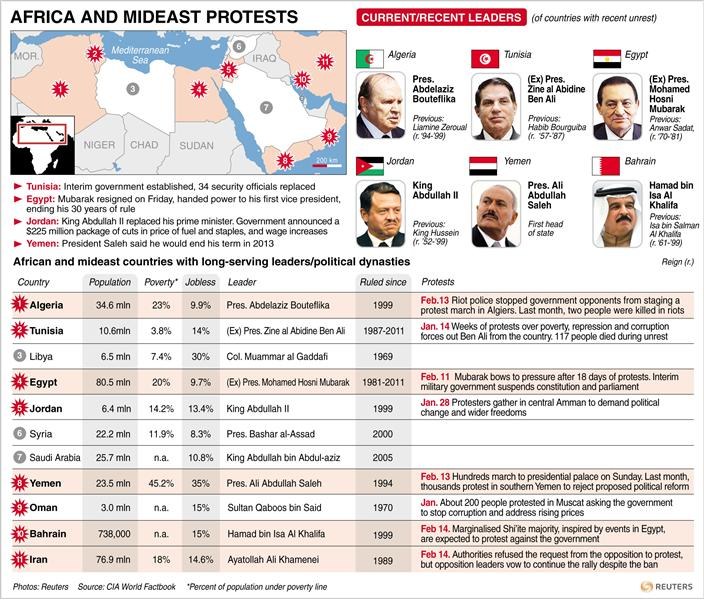