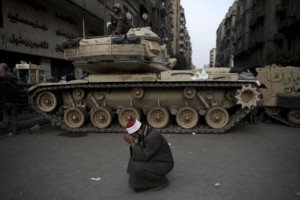 An 18-day pro-democracy revolt has terminated Hosni Mubarak’s 30-year rule, propelling Egypt into a new era and forcing authoritarian rulers elsewhere in the Middle East to reassess their strategies for survival.

Mubarak, 82, quit on February 11 after a series of half-measures failed to satisfy popular demands for him to go immediately. He handed over to a military council, which is now facing domestic and U.S.-led pressure for a transition to civilian rule.

The revolution in Egypt, a staunch U.S. ally under Mubarak, has wrenched the most populous Arab country from the former president’s stultifying grasp, although it remains to be seen if his whole security-based system will also crumble.

Here are some of the main political risks:

The council said on February 12 the present government would remain in place until a new one could be appointed as part of a transition to civilian, democratic rule.

The fate of all Egypt’s institutions is up in the air, as well as its constitution, tailored to keep Mubarak in power.

The 16-man military council excludes Omar Suleiman, appointed vice-president by Mubarak on January 29. The former spy chief announced Mubarak’s resignation, but it is not clear what role, if any, he will play in the transition.

Pro-democracy activists, in a “People’s Communique No. 1,” are demanding the dissolution of the cabinet Mubarak appointed on January 29 and the suspension of the parliament elected in a rigged poll late last year. They want emergency law ended, military courts scrapped and all political prisoners freed.

The communique demands a transitional presidential council, with four civilians and one military member, and a transitional government of technocrats to run the country and prepare for elections within nine months.

It demands free media and syndicates, and the formation of political parties. In addition, it seeks the creation of a body to draft a democratic constitution enshrining human rights.

The military council has not said exactly how it will proceed, although before Mubarak quit it said a presidential election, due in September, would be free and fair. The timing is now uncertain, but U.S. President Barack Obama has urged the military to lay out a clear path for free and fair elections.

The army, generally respected by Egyptians, made no effort to crush the anti-Mubarak protests. The future of riot police and other security forces, who lost control of the streets after failing to quell demonstrators by force, is uncertain.

* Any sign of the military reneging on its promised handover to civilian rule could ignite new demonstrations by protesters emboldened by their victory over Mubarak’s security apparatus.

Assuming some form of democracy emerges from the tumult, many different parties or individuals could come to the fore.

Egypt’s registered opposition parties have been weakened, fractured or compromised under Mubarak. Protest groups that have sprung up in recent years have proved far more nimble, effective and adept at using social media as Mubarak’s grip weakened.

Among possible leaders is Ayman Nour, who challenged Mubarak in the 2005 presidential poll and was later jailed on forgery charges which he denied, saying they were politically motivated.

Another contender for high office may be Amr Moussa, a popular former foreign minister, who has said he will resign from his post as secretary-general of the Arab League. Other individuals have emerged, such as retired diplomat Mohamed ElBaradei and scientist Ahmed Zewail, both Nobel Prize winners.

The best organized group is the Muslim Brotherhood, but its true level of support — and internal cohesion — is not known.

Nor is it clear that the Brotherhood, which came late to the protest movement that blossomed in January, wants power, or at least wants it now. The group’s previous strategy has been to win over Egypt’s majority Muslim population gradually to its vision of a pluralistic, democratic and Islamist state.

* Any signs that an Islamist-led government might be elected would arouse concern in Israel and the United States, which now gives Egypt about $1.5 billion a year, mostly for the military.

Egypt’s daunting social, economic and sectarian problems have not gone away. Any new government will have to cope with high expectations from a rapidly growing population of 80 million desperate for jobs and improved living standards — 20 percent of Egyptians live on less than $1 a day.

Much of the economy has ground to a halt since the unrest broke out. Banks reopened on February 6 without a dramatic fall in the pound. The stock exchange, hammered before the protests forced its closure, is expected to reopen on February 16.

In December, analysts polled by Reuters had forecast that the economy would grow by 5.4 percent in the fiscal year to June. The government’s target is 6 percent but it now acknowledges this could be cut by 2 percentage points or so.

Egypt’s economy was worth an estimated $217 billion last year, half that of Saudi Arabia. It relies on tourism, foreign investment and Suez Canal fees. A sustained dip in foreign currency revenue could put the pound under pressure.

Before Mubarak fell, the government raised public sector salaries by 15 percent. Public spending is likely to stay high, and any government will feel pressure to keep taxes down, maintain subsidies and provide money for the unemployed.

As a result, the state budget gap is likely to balloon toward 10 percent of gross domestic product this year, BNP Paribas estimates, above the government’s 2010/11 guidance of 7.9 percent.

Central bank reserves stood at $36 billion at the end of 2010, enough to cover immediate capital outflows and defend the pound.

Egypt will have to revive business confidence, perhaps helped by prospects of a serious anti-corruption drive in the post-Mubarak era, and persuade tourists it is safe to return.

The anti-Mubarak protests focused inward, rather than trying to fire up crowds with anti-U.S. or anti-Israeli slogans.

The Muslim Brotherhood, which espouses non-violence itself but which has ties to the Palestinian group Hamas, is certainly hostile to Israel, but has not demanded that Egypt immediately tear up its 1979 peace treaty with the Jewish state.

The Higher Military Council said on February 12 Egypt was committed to its international treaty obligations.

Without Mubarak, it is unlikely Egypt will be as loyal a partner of the United States and Israel as before. However, few Egyptians are interested in returning to a state of war with Israel or in shredding ties with Washington.

A new government must decide how to deal with the border with the Hamas-run Gaza Strip, which Egypt had kept largely shut in line with Israel’s economic siege of isolate the territory.

* Any change in Egypt’s relations with Israel could have knock-on effects on ties with the United States.