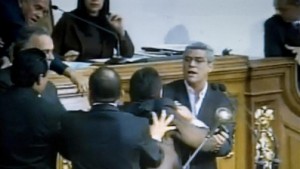 It was the second scuffle among lawmakers since early January, when newly elected opposition lawmakers took their seats in a legislature that had for years been controlled almost exclusively by Chavez allies.

Tensions boiled over on Thursday when several opposition lawmakers, including Alfonso Marquina, approached the podium during a debate involving top government officials who were taking questions. Marquina complained that boisterous Chavez supporters inside the chamber should be silenced.

Incensed lawmakers in front of the podium began pushing and shoving, then Marquina and pro-Chavez lawmaker Henry Villanueva went to blows.

The melee ended after the assembly’s vice president called for calm and security guards and fellow lawmakers separated Marquina and Villanueva.

Another scuffle between the rivals factions erupted last month, but nobody was injured in it either.

The arrival of those lawmakers in early January raised tensions with Chavez’s allies used to rubber-stamping government initiatives. Sessions have seen insults and threats.

The opposition’s gains prevent Chavez allies from obtaining the two-thirds majority needed to pass some types of legislation. WP