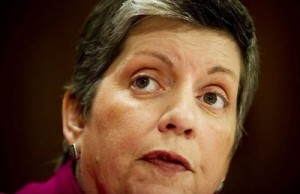 Senior Homeland Security Department officials warned Wednesday that the threat to the United States is the highest it has been since the attacks of Sept. 11, 2001, citing the emergence of more foreign terrorist groups, a sharp increase in extremists in this country and the “lone wolf” operator whom authorities worry they may not be able to stop.

“The terrorist threat facing our country has evolved significantly,” said Homeland Security Secretary Janet Napolitano. “In some ways, the threat facing us is at its most heightened state since those attacks.”

Michael E. Leiter, director of the National Counterterrorism Center, said his concerns included someone operating unbeknownst to authorities and with the means and determination of a Faisal Shahzad, who is accused of parking a car bomb in New York’s Times Square last May. The bomb failed to detonate, and Shahzad was arrested as he was boarding a flight out of the United States.

“Perfection is no more possible in counter-terrorism than it is in any other endeavor,” Leiter said. Though officials “work tirelessly,” he said, “we cannot guarantee safety.”

The officials appeared before the House Homeland Security Committee in its first hearing since Republicans took control last month. Rep. Peter T. King (R-N.Y.), the panel’s new chairman, is planning more hearings next month into the radicalization of American Muslims. Despite growing complaints that the hearings will unfairly target the Muslim community, King vowed again Wednesday to press forward.

“Homegrown radicalization is a growing threat, and one we cannot ignore,” he said. “This shift, as far as I’m concerned, is a game-changer that presents a serious challenge to law enforcement and the intelligence community.”

King also wants to study the danger from biological and chemical weapons.

“It’s very likely that the next attack against a major city in this country will be launched from the suburbs, similar to what happened in Madrid and London,” he said. “The nightmare scenario would be to have that attack involve a dirty bomb, which would put that metropolitan area off-limits, besides the massive loss of human life.”

Napolitano said “there still is much work to be done” in combating biological or chemical weapons, but added, “We are more prepared than we were two years ago.”

She and Leiter said that though Al Qaeda has been damaged by U.S. retaliation, other terrorist groups in Yemen, the Arabian Peninsula and Pakistan are gaining in strength and numbers, and have been linked to recent attempts to strike in this country. They mentioned the Times Square incident and the Christmas Day attempt in 2009 to bomb an airplane landing in Detroit.

Leiter said Al Qaeda’s loss of some of its effectiveness “reduces the likelihood of a large-scale organized attack.” But, he said, “the negative aspects of it is it allows the franchises to innovate on their own.”

On another matter, Rep. Loretta Sanchez (D-Garden Grove) said the FBI often infiltrated mosques in her district. “What are the safeguards that we now have in place that we aren’t sending people into mosques and trying to elicit proactively somebody to create some sort of terrorist attack?” she asked.

Leiter said FBI and Justice Department guidelines prohibited targeting religious groups, and added: “Many of our tips to uncover active terrorist plots here in the United States have come from the Muslim community. So we have to make quite clear that the communities are part of the solution and not part of the problem.” LAT