Strong signs that Mubarak will step down tonight 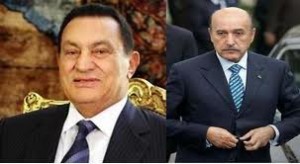 It is looking increasingly likely that Egyptian President Hosni Mubarak is not going to retain the presidency until September. In fact, he might not even retain it until dawn tomorrow.

With mass protests expected to resume Friday – organizers are expecting the biggest turnout in Cairo yet, with demonstrators scheduled to stream in from around the country – there has been a frenzy of activity today from the military and the ruling National Democratic Party that all make the convincing case that something is afoot.

Mubarak is expected to speak tonight. NBC News and Al Jazeera have both reported, citing unnamed sources, that Mubarak will step down.

Lending weight to that likelihood were statements today from the powerful Egyptian military and from a senior member of Mubarak’s ruling National Democratic Party. Hossam Badrawi, the NDP’s secretary general, strongly implied to CNN that Mubarak might step down by tomorrow.

Earlier this week Vice President Omar Suleiman, a former general and intelligence chief who has been Mubarak’s closest adviser for more than a decade, was insisting that Mubarak should hang on until elections scheduled for September. He was making veiled threats of armed action against protesters if they don’t withdraw.

But the military appears to be taking into account the chance for violence and a tarnishing of its own reputation ahead of tomorrow’s protests.

Today, the Supreme Council of the Egyptian Armed Forces, similar to the joint chiefs of staff in the US, met in Cairo. While they didn’t call for former Gen. Mubarak’s immediate ouster, the president didn’t get the kind of four-square backing from the military he’s relied on during his almost 30 years in power.

Also telling was that Mubarak, a former air force man, didn’t chair the meeting, as is customary. Instead Defense Minister Mohamed Tantawi, a former army general, led the meeting. Mr. Suleiman was also not in attendance.

The generals had a statement read on State TV. “Based on the responsibility of the armed forces and its commitment to protect the peopleb… and in support of the legitimate demands of the people [the army] will continue meeting on a continuous basis to examine measures to be taken to protect the nation and its gains and the ambitions of the great Egyptian people.”

What those words precisely mean is hard to parse. But a statement of fealty to the aging Mubarak it clearly was not.

To be sure, this all could be a head fake to take the steam out of the protests planned for tomorrow. Already at Tahrir Square, the focal point of Cairo’s protests, there are splits emerging between demonstrators, between those who feel Mubarak’s resignation is sufficient, and others who fear they’re watching a military takeover of the transition process that will end with the same regime in just a new set of presidential clothes.