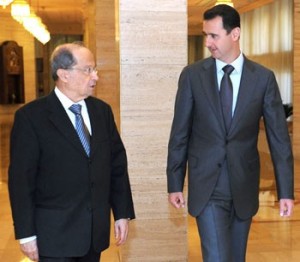 Following the meeting Aoun “expressed his appreciation to Syria’s stances in its support for Lebanon and its commitment to its unity and stability”, the report said

Aoun traveled to Aleppo , aboard a private Syrian presidential plane , on Tuesday to participate in the celebrations of Saint Maroun Day in Brad .

In addition to Bassil Aoun was accompanied on the plane by Minister Fadi Abboud, and FPM MPs Ibrahim Kenaan, Nabil Nicolas, Naji Gharious and Fadi al-Aawar, in addition to his family and Former MPs Salim Aoun and Camille Khoury and Pierre Raffoul .

Hezbollah brought down PM Saad Hariri’s government on January 12 over the Special Tribunal for Lebanon’s ( STL) indictment which is widely expected to implicate Hezbollah members in the assassination of former PM Rafik Hariri in 2005 .

Nagib Mikati, who was backed by Hezbollah and its March 8 allies including MPs Walid Jumblatt and Mohammad Safadi, was appointed by president Michel Suleiman as PM-designate to form and head the next cabinet , giving Hezbollah and its allies increased leverage in the country and provoking widespread protests.