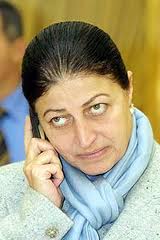 Future bloc MP Bahia Hariri said on Sunday morning at the Mohammad al-Amin mosque in downtown Beirut during the commemoration of the 2005 assassination of her brother, former PM Rafik Hariri.“The premiership is not a property, inheritance, or tool, but rather an expression of the people’s will.”

Hariri stressed : “No force can ignore the people’s votes,” in reference to the 2009 elections in which March 14 alliance won the majority of the seats in the parliament

“ Hariri’s blood is not a bridge to authority or positions,” Hariri said adding “It is the property of the youth who rose up to reject crime and oppression and wanted to preserve Lebanon’s peace and safety ….Hariri’s martyrdom will only be a bridge to a better life and a just state that embraces all its children – a state of institutions.”

“ Since 2005 , we in March 14 expressed our truth, and our discourse was a study in patriotic principles and civil peace,” she said, calling on the Lebanese to persevere with patience.

“We trust President Michel Suleiman will not allow the collapse of national unity.” She added

that weapons were used to force a change in the majority and the nomination of PM designate Najib Mikati, came after pressuring MP Walid Jumblatt and other MPs .

Hajjar , a former member of Jumblatt’s defunct Democratic Gathering bloc said time will tell if Mikati is going to be representing Hezbollah only or the whole country

The Iranian- and Syria-backed Hezbollah brought down PM Saad Hariri’s government on January 12 over the Special Tribunal for Lebanon’s ( STL) indictment which is widely expected to implicate Hezbollah members in the assassination of former PM Rafik Hariri in 2005 .

Mikati, who was backed by Hezbollah and its March 8 allies including Jumblatt and Mohammad Safadi, was appointed by president Michel Suleiman as PM-designate to form and head the next cabinet , giving Hezbollah and its allies increased leverage in the country and provoking widespread protests.