Cheney has kind words for Mubarak 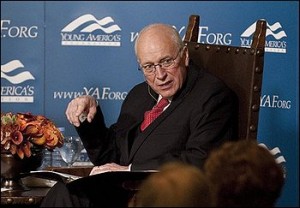 As protesters in Egypt pressed forward with calls for the resignation of Hosni Mubarak this weekend, former Vice President Dick Cheney said that the longtime Egyptian leader had been a “good friend” to the United States who deserved to be treated well.

Mr. Cheney, speaking on Saturday at an event celebrating the 100th anniversary of the birth of the late President Ronald Reagan, stopped short of saying what he thought would or should happen in Egypt, saying that the Egyptian people would determine the outcome.

But Mr. Cheney said that from the standpoint of American interests, while democracy and freedom in other countries were to be celebrated, they were not the only important issues. On other fronts, he said, Mr. Mubarak had long helped the United States.

He recalled meeting with Mr. Mubarak in Alexandria in 1990, when Mr. Cheney was the secretary of defense in the administration of George H.W. Bush and helped lead diplomatic efforts to put together a coalition to oust Iraq from Kuwait after Saddam Hussein’s invasion.

At the time, Mr. Cheney said, Mr. Mubarak was among the first Arab leaders to publicly sign on to the effort, allowing the United States to use Egyptian air space and the Suez Canal to get troops to Saudi Arabia. Later, he added, Mr. Mubarak sent two divisions of the Egyptian army to fight alongside American troops in Kuwait.

Mr. Cheney did not directly address other aspects of the alliance, from Egypt’s longstanding peace treaty with Israel to its role in taking and interrogating terrorism detainees through the Central Intelligence Agency’s rendition program. But he alluded to other policies Mr. Mubarak had undertaken over the years beyond his help in the first Gulf War.

“I think President Mubarak needs to be treated as he deserved over the years because he has been a good friend — not only of the United States, but a lot of other folks that we do business with, work with and have dealt with too. So you’re looking for a balance here.”

While sidestepping a question about whether it was in the interest of the United States for Mr. Mubarak to stay in power, Mr. Cheney hinted that his retirement after ruling Egypt for 30 years might not be the worst thing for him personally.

“I also think that there comes a time for everybody, when it’s time to hang it up and move on and someone else can take over,” Mr. Cheney said. “That’s true if you’re running a company, or if you’re a vice president, or if you know you are president. You get to a point where the years add up, the burdens become tougher to deal with. But as I say, that is a decision only the Egyptians can make.”

Mr. Cheney also suggested that people outside of the White House may not know exactly what the Obama administration has been saying to Mr. Mubarak. Mr. Cheney said that it was important for diplomatic communications to remain private so they can be effective.

“It is very hard for some foreign leader to act on U.S. advice in a visible way,” Mr. Cheney said. If “you tell me as the president of the United States that I’ve got to do X, and you do it publicly, then if I do X, my people think I’m not my own man — I do the bidding of the Americans. It’s exactly the wrong way to go.”

He added: “There is a reason why a lot of diplomacy is conducted in secret. There are good reasons for there to be confidentiality in some of those communications.”

Mr. Cheney’s remarks came during a period of turmoil over the confidentiality of diplomatic communications due to the leaking of more than 250,000 State Department cables to WikiLeaks, which has made several thousand of them public alongside a consortium of news organizations, including The New York Times, that obtained access to the archive.

Some commentators have attributed to the WikiLeaks documents a role in the current protests. The Egyptian protests were sparked after a similar uprising in Tunisia, which many believe was fueled in part by revelations in the cables about the corruption of the Tunisian government.

Mr. Cheney spoke at a program hosted by the Young America’s Foundation, a conservative group that now owns Mr. Reagan’s former ranch in California. His remarks are available on the C-SPAN Web site, with the portion devoted to Egypt beginning at about the 36-minute mark.NYT