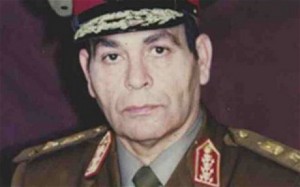 Islamic militants from Iran, Lebanon and Palestine contributed to Egypt’s unrest after “infiltrating” the country, a former Egyptian military chief of staff has claimed.

Gen Salah Halabi said that “intruders” and “external elements” entered through tunnels between Sinai and the Gaza strip, and could be working with the Muslim Brotherhood opposition group under a strategy drawn up before the protests against President Hosni Mubarak began in Egypt.

“I strongly believe that the destruction, fires, freeing of prisoners and terrifying of the Egyptian people and foreign press are acts shaped and tailored by external elements,” he told The Sunday Telegraph. “Investigations will show this fact in the near future.”

He also insisted that the military would remain out of politics and respect the results of future elections.

Gen Halabi, the chief of staff from 1991 to 1995 who ran the Arab Armament Organisation, a major military procurement business, after his retirement from the military, made the comments during an interview from his home in Cairo. His views provide a powerful insight into the thinking of senior ranks within the one Egyptian institution that commands the respect of both protesters and ruling party alike.

Sunday Telegraph: As the world watches events in Egypt, how do the armed forces view their role?

“On the other hand, some intruders infiltrated the situation to threaten Egyptian national security with acts of destruction and brutality. The Armed forces had to secure the streets, economy, regime and the people (anti and pro-Mubarak activists) while avoiding use of violence. This is a very sensitive role. In general terms, the armed forces should not interfere in any internal conflict nor take any side.”

Sunday Telegraph: How do you feel when you see the violence and the fighting and could you ever have imagined witnessing this on the streets there?

Gen Halabi: “The violence we see is a natural result of the clash of two opposite groups of activists embracing opposite ideas and beliefs. I never thought I could see these acts in Egypt nor believe they come from Egyptians.”

Sunday Telegraph: There has also been US pressure for President Mubarak to stand down before the elections in September. Where do you think the current Egyptian senior officers stand on this issue?

Gen Halabi: “Any foreign pressure would not be accepted by most Egyptians. As for the senior officers, they have their own opinion, but the declared opinion is that they are professional fighters who do not get involved in politics and support constitutional legitimacy.”

Sunday Telegraph: What would the military’s position be on elections if it seemed that the Muslim Brotherhood or a coalition of Islamic parties might emerge victorious?

Gen Halabi: “Are we talking democracy or semi-democracy here? Free elections will let the people choose their government and leader and everybody has to accept this as per the rules of democracy.”

Sunday Telegraph: How do you predict that the next few days and weeks will play out? How will stability and security be restored? What process will the armed forces play in this?

Gen Halabi: “I predict that things will be calmed down by the new leaders of the country and we will take great steps towards democracy and Egyptian people will recover from this situation because Egypt is one of the great countries in the world. This crisis is not greater than 1967 defeat [by Israel]. And Egypt will grow stronger for sure with democracy, social equity, and by eliminating corruption. Security and order will be restored gradually after transferring this responsibility to the police forces.”