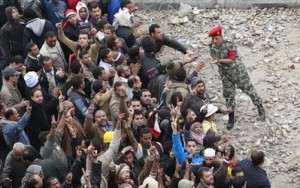 The united front among Egyptian opposition parties fractured Saturday as several of them began negotiating with Vice President Omar Suleiman, despite earlier promises that they would not agree to talks until President Hosni Mubarak stepped down.

Meanwhile, state television reported that the top leadership of the ruling National Democratic Party, including the president’s son, Gamal Mubarak, and the party secretary general, Safwat el-Sharif, had resigned Saturday. Hossam Badrawy, a physician and reformist, was named the new secretary general and also given Gamal Mubarak’s former post as policy chief.

Mounir Fakhry Abdel Nour, secretary general of the liberal Wafd Party, said he and other party officials had presented Suleiman with their proposals for constitutional change. Nour said that Suleiman mostly listened but at one point told the Wafd officials that “we need to go ahead with this as soon as possible.”

Nour said that Suleiman ruled out Mubarak’s resignation from the presidency. “Not only will he not resign, he will not cede or delegate his powers,” Nour said.

That stance means it is unlikely other opposition parties will join the talks. Nour said that Wafd decided to enter into negotiations because it did not see an alternative that would not involve an army takeover.

“We need a transition of power within a constitutional framework,” he said. “At this stage, we have two possible directions. Either constitutional reforms or a coup d’etat by the army. I don’t see another way out.”

Separately, a council of about 30 Egyptian intellectuals and business leaders continued holding talks but had not heard back from the government on an earlier proposal for a way out of the crisis, according to Nabil El Arabi, a retired international judge who is a member of the group.

“We are at a standstill,” El Arabi said.

Diaa al-Rashwan, another member of the group and a political science scholar, said many opposition factions were dispirited by the news that Mubarak had met with several cabinet members Saturday to discuss ways to prop up Egypt’s faltering economy. That meeting, announced on state television, suggested that Mubarak had no plans to step down.

At the same time, Rashwan said the tentative discussions between the government and some opposition groups were of incidental importance compared to the strains that have surfaced in Mubarak’s relations with his military chiefs.

“Inside the government, there are still very hard negotiations going on between the president and the Egyptian army,” said Rashwan, an analyst at the Al-Ahram Center for Political and Strategic Studies. “The army cannot stand for long this pressure that has been building on the streets, this loss of life and lack of security.”

Meanwhile, the crowd of anti-government demonstrators in Cairo’s main downtown square dwindled to a few thousand amid a light afternoon drizzle and tight security on the roads leading to Tahrir Square. Protesters have vowed to remain in the square until the president steps down.

Still reeling from clashes with pro-Mubarak squads, the demonstrators continued building makeshift barricades to hold their ground in the square. They were working cooperatively with the army to keep Tahrir orderly.

Demonstrators denounced the prospect of a negotiated transition of power, saying opposition leaders should not hold formal talks with the government until Mubarak resigns.

“No negotiations before he leaves,” they chanted, referring to Mubarak.

Mubarak appointed Suleiman, his intelligence chief, as vice president shortly after the demonstrations began. On Saturday afternoon, the protesters in the square were flanked by a large banner that read: “No Mubarak, no Suleiman. Both are American Agents.”

“The Egyptian army is part of the people that will follow the masses,” Khamenei said.

“We hope that the army of Egypt takes a careful and cautious look at this practical model and comes out of tyranny’s darkness and joins the light of God,” Mousavi said, according to the semiofficial Fars news agency.

Egyptian officials have denounced foreign meddling in the crisis.