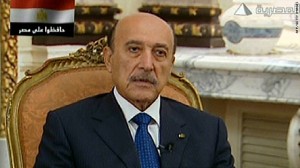 Confusion continues to surround the report about the attempted assassination against Egyptian Vice President Omar Suleiman .

A senior Egyptian security source denied on Saturday the report of an assassination attempt against Suleiman.

The source, who did not want to be named, said there was no truth to the report at all.

According to the report, armed assassins targeted the convoy in which Suleiman was traveling, killing two of his bodyguards.

Fox News published an article on its website that a senior U.S. official had confirmed an attack that took place after Suleiman was appointed on Jan. 29, which killed two of his bodyguards. The U.S. official described it as an organized attack on Suleiman’s motorcade.

“I’m not going to… get into that question,” Gibbs told Fox News.

Suleiman is the first vice-president of Egypt to be appointed since Mubarak first took power almost thirty years ago. Mubarak himself occupied the position of vice-president under the former Egyptian president Anwar Sadat, and took the reigns of power after Sadat was assassinated in 1981.

Suleiman had been an intelligence chief and a powerful behind-the-scenes player for a long time, and his appointment was seen widely as an attempt by Mubarak to restore order.

Suleiman is well-respected by the military and is credited with crushing an Islamic insurgency in the 1990s. He was tapped for Egypt’s top intelligence post in 1993, at a time when the Arab world’s most populous nation was wracked with terrorist attacks targeting tourists and essential infrastructure.

As head of the Egyptian General Intelligence Directorate, known as the Mukhabarat, he has worked in the shadows of Mubarak’s regime, earning him the nickname of “the secret minister.”

Suleiman has been credited with saving Mubarak’s life. On a state visit to Ethiopia in 1995, Mubarak was to have traveled in a normal vehicle but Suleiman insisted that the president’s armored Mercedes be flown in from Cairo. Accounts of what happened in Ethiopia vary but it’s believed that Suleiman was sitting next to Mubarak when a hail of bullets pinged off the car. The bond forged that day cemented their relationship.