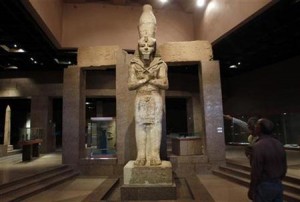 International museums are on high alert for looted Egyptian artifacts and some archaeologists have even offered to fly to the country to help safeguard its ancient treasures, museums said Wednesday.

Egypt has been rocked by an unprecedented nine days of demonstrations against President Hosni Mubarak’s 30-year-rule, and fears are high for the country’s priceless heritage after looters broke into the Egyptian Museum in Cairo last week.

The specter of the fall of Baghdad in 2003 looms large in the minds of Egyptologists, when thousands millennia-old artifacts were stolen or smashed by looters in the chaos following the fall of Saddam Hussein.

“The situation during the fall of Baghdad is the worst case scenario, but we think that’s not going to happen because there is such a movement to protect the antiquities,” said Karen Exell, chairwoman of Britain’s Egypt Exploration Society and curator of the Egypt collection at the Manchester Museum.

Egyptologists have been heartened by the reaction of ordinary Egyptians to chaos and lawlessness.

In Cairo hundreds of people formed a chain around the museum to protect it after looters broke into the museum Friday and destroyed two Pharaonic mummies, officials said.

“All of us who are friends of Egypt can help the efforts to stop looting of archaeological sites, stores and museums, by focusing on the international antiquities trade,” London’s Petrie Museum of Egyptian Archaeology said in a statement.

Exell said an international alert had gone out to watch for looted items, as well as offers of help. One had been posted on a global Egyptologist electronic bulletin board by a team of Spanish archaeologists, offering to help catalog artifacts.

Egypt is home to one of the world’s greatest ancient civilizations, which is also a major source of tourist income.

The British Museum, home to one of the world’s top collections of Egyptian antiquities, including the famed Rosetta Stone, called for more protection of the country’s heritage.

“It is a matter of the greatest concern that these irreplaceable objects should be fully protected to ensure their safety and survival for future generations,” the museum said.

Many key ancient Egyptian works were allowed to leave the country in previous centuries and are stored in international museums. Some critics say this is because authorities did not recognize their true value when they were unearthed.

Exell said this is not the case now.

“It’s been really heartening that ordinary people are protecting sites closest to them, they understand their value … People do feel very proud of their heritage.” Reuters

Photo: The 8-metres high sandstone statue of Ramses II (1279-1213 BC) at entrance to the Nubian Museum in the southern Egyptian city of Aswan, about 879 km (549 miles) south of Cairo. International museums are on high alert for looted Egyptian artifacts and some archaeologists have even offered to fly to the country to help safeguard its ancient treasures, museums said Wednesday