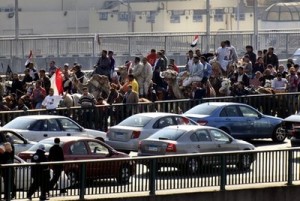 Scattered but violent clashes erupted Wednesday in central Cairo between supporters of Egyptian President Hosni Mubarak and the protesters now in the ninth day of calling for his ouster.

A large group of pro-Mubarak forces pushed their way for the first time into Tahrir Square, which had been dominated by peaceful anti-Mubarak protests. Scuffles, shouts and fisticuffs broke out as the rival camps faced off .

One man staggered away with blood running down his face after apparently being hit by a rock. Other men brandished wooden clubs and glass bottles.

The clashes came hours after the military called for demonstrators to go home, but soldiers were not involved in the clashes, which came a day after Mubarak pledged not to run for reelection later this year. Most of the soldiers were simply manning parked tanks..

The push into the square by pro-Mubarak forces appeared highly organized, concentrated on a few key access routes. The anti-Mubarak protesters have accused the Egyptian leader’s allies of paying people to rally in his support — and use force to intimidate the demonstrators.

Salma al Tarzi, an anti-Mubarak protester on the ground, told Al Jazeera English: Mubarak “wants it to seem that the people are fighting each other so he has an excuse” to crack down.

The clashes broke out shortly after the army called on protesters to abandon their campaign. Many of the anti-Mubarak forces were unaware of that call — and said they would disregard it in any event.

“We’re not leaving. We’ll sit under the tanks if the army tries to stop us,” said Omar Adli. Then he broke off speaking to run toward a nearby knot of men who had begun shoving one another and throwing punches.

Meanwhile, in continuing fallout from demands for change throughout the Arab world, the longtime leader of Yemen vowed to leave office before elections in 2013. President Ali Abdullah Saleh, under pressure from a boisterous coalition of relatively well-organized opposition groups, announced that neither he nor his son would stand for office and that he would pull back proposed constitutional changes that would make him ruler for life, according to news agencies.

“No to hereditary rule and no to life presidency,” Saleh told parliament, according to Agence France-Presse.

In the Egyptian capital, protesters spent another chilly night in Tahrir Square, some sleeping in tents that were a signal of determination to maintain a presence in the plaza that has become an icon of their movement.

By mid morning, hundreds of new arrivals had trekked to the square, but not in numbers nearly as large as the previous day, when hundreds of thousands flooded the country’s streets to demand Mubarak’s immediate departure.

The military’s announcement on state television was a clear signal that it has not abandoned Mubarak, who late Monday night announced that he would not run for reelection in September but made a plea to hold onto power in the interim.

“You are the ones capable of returning normal life to Egypt,” military spokesman Ismail Etman said. “Your message has arrived; your demands have become known.”

“The armed forces call on the protesters to go home for the sake of bringing back stability,” said another televised statement.

Protest organizers appeared to be searching for ways to keep the crowd engaged and energized; what sounded like a very little boy led the crowd in a back-and-forth chant by megaphone. “Leave! Leave!” they chanted, in reference to Mubarak.

To keep warm after waking up, men began jogging around the square while chanting, “Down with Mubarak.” Others walked from encampment to encampment, offering tea and ful, a traditional Egyptian dish and made of beans.

Protesters have set up a large projection screen in the square where they can watch television channels, including Al Jazeera, which has been officially banned in Egypt and had some sources of its signal jammed.

The political upheaval, ignited by a popular uprising that drove Tunisian President Zine el Abidine ben Ali from power Jan. 14, has shaken the Arab world’s most populous nation and galvanized calls for change across the region, including in Jordan, Syria, Algeria, Sudan and Yemen.

A day before making his announcement, the Yemeni leader’s government approved emergency financial handouts for 500,000 families and reduced tuition payments for students in an effort to placate those angry over the economy. A large anti-government rally is scheduled in the Yemeni capital tomorrow.

But in Egypt, the continued political crisis, fueled in part by economic grievances, has exacerbated day-to-day difficulties for many ordinary people. Businesses in the city center, together with banks across the country, remained closed for a fourth day Wednesday. The cash crunch is intensifying, especially because the shutdown coincided with the month’s end, and almost no one has been able to lay hands on a paycheck.

But in a sign of increased confidence, the government on Wednesday restored Internet service, which had been cut several days ago in an apparent effort to keep opposition demonstrators from coordinating.

Nations all over the world have dispatched charter flights to evacuate their nationals from the country, draining Egypt of much-needed foreign currency. Tourism, an economic pillar in the nation of pyramids, has all but died.

In a televised address late Tuesday, Mubarak said he would stand down from office within months while implementing reforms and paving the way for a transition, but he ruled out going into exile like Ben Ali. His statement followed calls by the Obama administration to begin an orderly transfer of power. The U.S. provides Egypt annually with $2 billion in foreign aid.

Washington’s move against Mubarak enraged some Israelis, who see Mubarak as a bulwark against Islamic radicalism. Egypt is one of only two Arab states that host Israeli embassies.