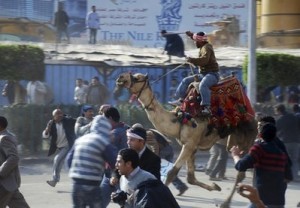 Conflicts escalated through the day as the two groups faced off, chanting slogans at each other, fighting and hurling missiles. Protesters at two entrances to Tahrir Square—by the Egyptian Museum and the route from downtown Cairo—came under attack from men heaving rocks and running into them with horses and camels.

The clashes, coming after Mr. Mubarak refused protesters’ demand that he step down immediately but agreed to turn over power following elections this fall, marked a dangerous new phase for the confrontations. Earlier Wednesday, an army spokesman appeared on state television to ask protesters to return home to help restore order.

Mubarak supporter Sayed Mohammed Sayed, 37 years old, said the protesters have pushed things too far by refusing to back down even after the president agreed to pursue reforms and eventually step down.

“The situation is unacceptable,” the air-conditioner technician said. “The majority of protesters are young people and aren’t aware of their actions and consequences.”

Mohamed ElBaradei, the leader of the opposition’s loose coalition, said in an interview that he had heard government supporters were sending men to Tahrir Square to attack protesters and warned against acts of violence. Attacks on demonstrators, he charged, would make it difficult to conduct negotiations with “a regime that is a bunch of thugs.”

At the downtown entrance to the square, groups of Mubarak supporters started organizing charges, running up and down the street creating mayhem. Protesters responded there by forming a human barrier three to four people deep to keep the Mubarak supporters out.

Mohamed Abdu, a 22-year-old graduate of Helwan University and a member of the Muslim Brotherhood, an opposition group, grew visibly shaken as the men began hurling rocks over the human barricade. One man on the protesters’ side pulled out a pair of large light bulbs from his backpack and threw them at the Mubarak supporters. He was quickly shouted down by protesters chanting “peace.”

Ibrahim Saadouni, 47, a lawyer who joined the protests, believed the violence was started by the thugs for hire that are a standard feature of Egyptian electoral politics. “They’ve come to create a civil war,” Mr. Saadouni said. “They’re doing this to make war so the army will step in to end the demonstrations, because we won’t leave.”

Eyewitness, however, said they saw members on both sides hitting each other with sticks. Some came away injured, with their heads bleeding. There were no signs of intervention by the police or military even when a number of men marched to Tahrir square on camels and horseback and began running into people, as well as hitting and whipping them. A few minutes later, they were stopped by protesters opposed to the president.

“They forced the people to get off the horses and the camels, and they have beaten them badly,” said Muhammad Khalifa, a translator. Other witnesses said pro-Mubarak protesters tore down banners denouncing the president as they advanced across Tahrir square.

In some areas, reporters were attacked by those who believe that the long-time ruler deserves to remain power.

The result was a dramatically different scene than the almost carnival-like atmosphere that prevailed in Tahrir Square on Tuesday. Some 250,000 protesters turned out for a rally, many with their families in tow.

The clashes were a reminder of the high stakes for the many Egyptians who have benefited from the regime and rely on it for work or status. Many pro-Mubarak demonstrators also expressed skepticism about the motives of the opposition and its leaders.

“We don’t want ElBaradei or any American agent,” said Hisham Zain, 38. “We want to continue with Mubarak until stability is formed and the end of his presidency. We want the presidency to be changed in a peaceful and smooth way.”