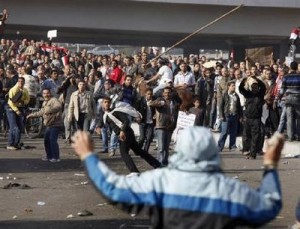 The casualty toll from violence in Cairo on Wednesday rose to one dead and 403 wounded from 350 wounded, health ministry officials said. The dead man, killed when he fell from a bridge, was a soldier.

Health Minister Ahmed Farid told state television most of those injured had been struck by stones thrown during clashes between demonstrators protesting for and against President Hosni Mubarak. There were no bullet wounds, he said.