Who Is Waiting to Take Over in Egypt? 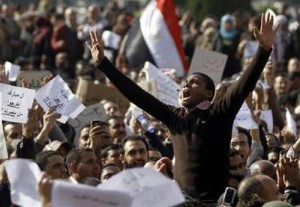 Following protests in neighboring Tunisia, Egyptians took to the streets today for the seventh day of demonstrations. Angered over corruption, unemployment, poverty and decades of political repression, protesters are calling for the ouster of President Hosni Mubarak, an autocrat who took power in 1981. Tens of thousands of people have taken to the streets, primarily in downtown Cairo, and dozens have been killed in clashes with the police. Organizers hope to marshal 1 million on the streets Tuesday in a show of anger that will force Mubarak to quit.

Why is Egypt important to the U.S.?

Egypt under Mubarak has been a staunch U.S. ally and a critical point of transit for much of the world’s oil. Millions of barrels of oil travel from the Middle East through the Suez Canal and a massive pipeline every day. Diplomatically, Egypt is one of two Arab countries that recognizes Israel and has helped broker peace deals. Mubarak’s government has also been a close U.S. ally in the fight against terrorism, and any regional instability could be dangerous to U.S. interests in the Middle East.

What’s the U.S. position on the protests?

Despite U.S. calls for increased democracy in the Middle East, American presidents have supported Mubarak for 30 years. Egypt receives over $1 billion in U.S. military aid annually, second only to Israel. Mubarak has warned that allowing free elections would open the door to Islamist parties, like the influential Muslim Brotherhood, from taking control and turning the country into a fundamentalist state.

President Obama has not outwardly called for Mubarak to step down. Secretary of State Hillary Clinton has also treaded lightly, called for an “orderly transition.”

What is Mubarak doing about the demonstrations?

Early on in the protests, the Egyptian government shut down the Internet and mobile phone networks, and police patrolled the streets sometimes clashing with protesters by firing tear gas and using their truncheons. Last week the army, a respected Egyptian institution, replaced the police in the streets, and many protesters thought it signaled a shift. Instead, the police returned and protests continued.

After three days of protests, Mubarak addressed the country on television. He fired his cabinet, called for an end to the protests and promised unspecific reforms. For the first time in three decades, Mubarak named a vice president, former the head of the country’s intelligence service Omar Suleiman.

Nevertheless, the situation on the ground has worsened as the protesters have been joined on the streets by looters who even tried to steal antiquities from the country’s prized museum.

Who will determine the future of Egypt?

Some suspect, Mubarak handpicked a vice president last week to ensure a smooth transition to someone he knew would be sympathetic.

Omar Suleiman, the former head of the intelligence service, was influential in negotiating secret deals between Israel and the Palestinians and is known as an effective communicator. He is familiar with the halls of power both in Washington and in Israel.

The new vice president announced today that he is organizing new elections in the coming weeks.

Protesters, however, say that Suleiman is just more of the same and their chants that Mubarak must go now include Suleiman.

The biggest name to make a play to replace Mubarak is Mohamed ElBaradei, a Nobel laureate and former head of the International Atomic Energy Administration.

El Baradei returned to Egypt last week after the protests started to gain momentum. He speaks fluent English, has worked with American leaders and is popular with progressive intellectual Egyptians, a fact that makes many regular Egyptians suspicious of him.

Many Egyptians find him out of touch and too close to the United States and ironically, Iran. When he arrived in Egypt, he appeared only briefly at the central protests near Tahrir Square but left once police began firing tear gas.

Opposition groups are considering rallying around ElBaradei, partly because he is believed to be a person who would be accepted by the West. 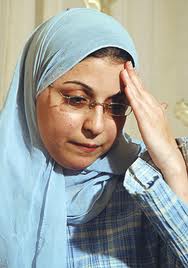 Group One of the country’s most prominent student activists is Israa Abdel-Fattah, a founder of the April 6 Group. Abdel-Fattah was detained by Mubarak in 2008 and has been instrumental in encouraging both students and women to join the protests.

The group takes its name from a 2008 protest when leftists, students and labor unionists backed textile workers in a general strike. The activists were quickly suppressed and many imprisoned. The April 6 Group has also been joined by another youth group, We Are All Khalid Said, named for a student killed by police in Alexandria.

The group of young people has galvanized angry Egyptians, and organized the protests through Facebook and Twitter. April 6 Group has called for a million people to turn out Tuesday in what could be a crucial showdown between demonstrators and Mubarak.

The Brotherhood is a religious movement which seeks to impose Islamic law in Egypt. It is the oldest and largest Isalmist group in the country. It has long been the closest thing to an opposition party in the country, despite being effectively outlawed.

The Brotherhood’s immediate influence on the crisis was hurt because it was slow to join secular protesters. Its inability to take action quickly signals to some observers that the party may not be in a real position to govern.

Additionally, the group has no one leader who would make an obvious replacement for Mubarak.

Mubarak was believed to have designated his son Gamal to succeed him as president, in what is often described as a “dynastic succession.” Mubarak’s American educated second son, Gamal lived in London runs an NGO and had been groomed for years to take over.

That plan, however, seems to have been scrapped in recent days by the protesters.

Mubarak’s reshuffle, Gen.Habib Al-Adly, the country’s hated interior minister was fired. Al-Adly, a longtime member of Mubarak’s government, and his ministry have been the focus of smaller protests in Cairo and Alexandria since 2010 when two policemen killed Khalid Said. The officers who allegedly beat Said to death were charged, but have yet to be tried.

Another longtime Mubarak crony who has been the face of public scorn was also axed in the reshuffle. Tycoon Ahmed Ezz, a millionaire accused of taking over the state steel industry, was chairman of the government’s budget committee. Ezz a friend of Gamal Mubarak, also resigned from the ruling party over the weekend.