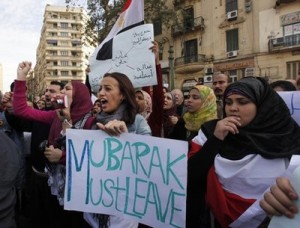 Hundreds of thousands of Egyptians took to the streets on Tuesday in scenes never before seen in this Arab nation’s modern history, roaring in unison for President Hosni Mubarak and his new government to quit.

The army’s pledge on Monday not to use force against demonstrators emboldened Egyptians to push for the biggest shake-up of the political system since 1952 when army officers deposed King Farouk.

More than 200,000 Egyptians crowded into Tahrir Square in central Cairo and 20,000 marched in Suez with reports of protests in other cities such as Alexandria.

“Mubarak go away to Saudi or Bahrain” and “We don’t want you, we don’t want you”, chanted men, women and children in a sea of people that began gathering from the early hours.

The scenes in Tahrir (Liberation) Square, which has become a rallying point for protests over poverty, repression and corruption, were in sharp contrast to Friday when police beat, teargassed and sprayed water cannon on protesters.

There had been talk that the protesters, some shouting “Revolution, Revolution, until victory,” would march on the presidential palace on Tuesday but by early afternoon the crowds had not moved from the square.

Initially unorganised, the protests against Mubarak are gradually coalescing into a loose reformist movement encompassing many sections of Egyptian society.

Young unemployed mixed with members of the Islamist movement the Muslim Brotherhood, and the urban poor held hands in solidarity with doctors and teachers.

“We are calling for the overthrow of the regime. We have one goal, and that is to remove Hosni, nothing else. Our politicians need to step in and form coalitions and committees to propose a new administration,” said Ahmed Abdelmoneim, 25, a computer engineer.

Effigies of Mubarak, who like all his predecessors was a senior military officer, were strung up from traffic lights.

Mubarak has not addressed the nation since Friday, when he sacked his cabinet. On Monday, it was his newly appointed vice president, Omar Suleiman, who announced a call for dialogue with all political forces. Protesters scent victory.

“The revolution won’t accept Omar Suleiman, even for a transitional period. We went a new democratic leader,” said Mohamed Saber, a member of the Muslim Brotherhood.

“We are very patient, we can stay here a long time … For the last 30 years this regime brought the worst out of the people. Now everyone is speaking out. Before everyone was negative and passive,” said Mahmoud Ali, 42, a civil servant.

What will come after Mubarak if he steps down is not so clear. Egypt’s opposition has been fragmented and weakened under Mubarak. The Muslim Brotherhood has the biggest grassroots network with its health and other social charity projects.

The group, banned from politics under Mubarak, says it wants an Islamic, pluralistic and democratic state.

“Our country has many people capable of being president,” said Essam Kamel, 48, a lawyer, although he said he did not want Nobel Peace Prize laureate Mohamed ElBaradei, who has said he was ready to take on a role in the transition.

But Kamel added: “We are Muslims, but we don’t need an Islamic government.”