by yalibnan
2582
Iranian opposition leader Mir-Hossein Mousavi issued a strong statement of support for the Tunisian revolution and Egyptian uprising linking them to popular revolt against President Mahmoud Ahmadinejad in 2009.
Share: 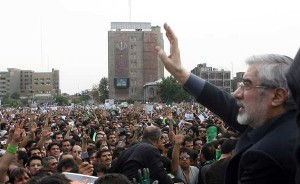 “The Middle East is bracing for big events likely to influence the fate of the region and its nations and even the world,” he said in a Persian-language statement posted to his website Kalemeh.com. “What is underway is aimed at changing the tyrannical order gripping a large number of nations in the region and doubtlessly, whatever we are witnessing in the streets of Tunis, Sana, Cairo, Alexandria and Suez take their origins from the millions-strong protests in Tehran in June 2009.”

The statement followed what many critics have described as mendacious and cynical attempts by Iran’s hard-line Islamist rulers, including Ahmadinejad, to describe the upheavals throughout the Arab world as Islamic uprisings, contrary to the reality on the ground.

Though Iranian officials and their supporters in the West publicly claim that people in Tunis, Tunisia, and Cairo are clamoring for Islamic rule, they likely are attempting to spin the uprisings to their favor, analysts say. Even as Iran’s Persian and English-language news outlets describe an Islamic upheaval, its Arabic language al-Alam channel makes no such claims, knowing well that viewers in the Arab world would dismiss such claims.

In his statement, Mousavi suggested that Iran’s uprising after Ahmadinejad’s reelection debacle inspired the Arab world.

“During those days, people thronged the streets with the slogan ‘Where is my vote?’ to peacefully follow up on the rights denied them,” Mousavi said. “Today, the ‘Where is my vote?’ slogan developed by the people of Iran has resulted in the calls for the collapse of the regime in Cairo, Suez and Alexandria.”

Mousavi compared Egypt’s recent parliamentary election to the Iranian elections and likened the crackdown in Egypt and Tunisia to that by supreme leader Ayatollah Ali Khamenei’s minions in Tehran.

“If we scrutinize the falling regimes in the Arab world and the Middle East, we will see all these regimes similarly invade social networking websites, online media and the press, text messaging services, telephone lines and Internets are shut down, pens are shattered and protesters are thrown into jail,” he said.

He flatly accused Iranian leaders of lying about Egypt’s troubles, and subtly likened Cairo to Tehran.

“The interests hidden behind the ruling ideology in Iran do not let the realities come to bold relief,” he said. “Friday Prayers leaders and preachers, fully at the disposal of [the regime], do not pay attention to the corrupt and cruel performance of the Pharaoh of Egypt — detentions, forced confessions, trumped up charges and organized lootings have resulted in the current explosive conditions in Egypt.”

Iranian officials like Ahmadinejad and his coterie of sycophants in the official media and clergy “point to the ‘Day of Wrath’ in Egypt without saying that the wrath is an outcome of corruption and inefficiency at the highest level of the government — squandering the public wealth, muzzling down people, breaking pens, hanging in rapid succession and setting up gallows are for intimidation of people.”

“Had the Egyptian government respected people’s sovereignty on their own destiny and not stolen their votes, it would not have witnessed the calls for its own downfall,” Mousavi said. “The [Iranian leaders] may have forgotten that persistence of intimidating policies will inevitably lead to emergence of days of national wrath everywhere.”

He added, “Pharaohs often hear the voice of the nation when it is too late.”

Mousavi also saluted those in the streets of the Arab world clamoring for change. “The Iranian nation respects the great revolution of the courageous Tunisians and the rightful uprising of people in Egypt, Yemen and other countries in the region,” he said. “We offer our salutations to all brave, aware and struggling people in Egypt, Tunisia, Jordan and Yemen and pray to Almighty God for their victory.”