Egypt’s ElBaradei tells U.S.: ‘You have to make a choice’ 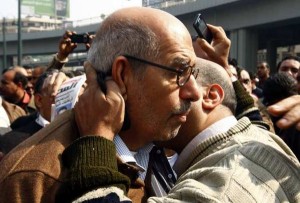 Egyptian dissident Mohamed ElBaradei called the U.S. position on the Egyptian crisis a disappointment and condemned Egyptian President Hosni Mubarak’s early Satruday morning speech as “almost an insult to the intelligence of the Egyptian people.”

ElBaradei also said in an interview with the English-language segment of France 24 that he would continue to speak out against Mubarak’s regime, whether he was under house arrest or not, until the president leaves office.

“I will continue to participate in whatever it takes to make sure that the Mubarak regime should leave,” he said. “I think that there is a consensus here in Egypt in every part of society that this is a regime that is dictatorial, that has failed to deliver on economic, social or political fronts and that we need a new beginning, an Egypt that is free, that is democratic and we need to go through a transitional period.”

ElBaradei said Egyptians had hoped that Mubarak would have announced his resignation earlier on Saturday, “but at the last minute he came out with an empty statement which was a huge disappointment to the Egyptian people.”

Mubarak, he said, doesn’t have a clue.

“He obviously did not understand the message from the Egyptian people,” ElBaradei said. “It was almost an insult to the intelligence of the Egyptian people to tell them that the only response is that I will have a new government. People know full well that he is in charge of every aspect of running the country. He did not elaborate on one single economic or social reform.”

ElBaradei said he expected “more demonstrations and larger demonstrations” especially since the police appeared to have handed control of the streets to the army. “It’s the army that has taken over and the army traditionally never really clashes with the Egyptian people, so I hope he will understand the message before things get ugly,” he said.

As for the U.S., ElBaradei said the leadership had fallen short of Egyptians’ expectations.

“What is … very disappointing to the Egyptian people is the message coming from the U.S., which is saying that we are going to work with the Egyptian people and with the government,” he said. “Well, you have to make a choice. This is an authoritarian government and on the other hand the people have been deprived of their freedom for 58 years.”

In general, ElBaradei predicted the situation would worsen before it got any better. “Things do not look good here,” he said. “People are very frustrated and I think the situation will escalate in my view.”