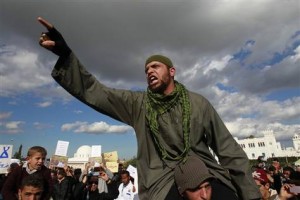 The march was the first significant Islamist protest since the fall of president Zine al-Abidine Ben Ali, who ran a strictly secular state in which Islamists were often jailed or forced into exile.

Some carried placards reading: “We want freedom for the hijab, the niqab and the beard.”

Under Ben Ali’s rule, women who covered their hair by wearing the hijab, in the Muslim tradition, were denied jobs or education. Men with long beards were stopped by police.

“We demand the revision of the terrorism law … and say no to the war on the niqab,” one woman told Reuters TV, her face entirely covered by a black veil, or niqab.

PhotoBlog: The fruit vendor who may have changed the Arab world

Islamists played no visible part in the “Jasmine Revolution” that toppled Ben Ali, but when the Ennahda, the country’s largest Islamist movement, was allowed to contest elections in 1989, it came second to the ruling party.

Since Ben Ali was forced to flee to Saudi Arabia on January 14 in the face of violent unrest over poverty and political repression, protesters have been gathering in Tunis to demand that the new interim government be purged of Ben Ali loyalists.

On Friday police stormed the camp where they have been holding a round-the clock sit-in for the past five days.

Protesters threw stones at police, who fired tear gas to disperse them.

A cabinet reshuffle on Thursday, in which ministers loyal to Ben Ali were dropped, earlier received a mixed response from the protesters, some saying the continued presence of the prime minister in the government was unacceptable.

Prime Minister Mohamed Ghannouchi said 12 ministers would be replaced, purging members of the former ruling party including the interior, defense and foreign ministers.

Some protesters said the new government line-up met most of their demands and it was time to end the sit-in, while others said they would not go until Ghannouchi did.

“I feel this is an improvement. Lots of doors that were closed have been opened. The ones making the noise have a brother or someone who died so they are upset,” said Raed Chawishi, 24, outside the prime minister’s office.

“We are not leaving here until Ghannouchi leaves and we get a brand new government,” he said.

Tunisia’s uprising has electrified Arabs across the Middle East and North Africa, where many countries share the complaints of poor living standards and authoritarian rule.

Inspired by Tunisia’s example, tens of thousands of Egyptians have taken to the streets to demand an end to President Hosni Mubarak’s 30-year rule.

Tunisians protested outside the Egyptian embassy in Tunis, calling for the overthrow of Mubarak and other Arab leaders.

Protests have also spread to Yemen, where thousands took to the streets to demand a change of government. msnbc