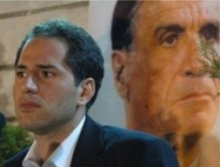 Phalange party MP Sami Gemayel will be holding a press conference Wednesday at 1:00 p.m. to address the latest developments, according to a statement issued by his press office.

Earlier today, Sami’s cousin Phalange party MP Nadim Gemayel urged all the Lebanese people to take part in the March 14 alliance protests on Tuesday evening, saying that the gathering will take place to “reject Hezbollah’s coup against the Lebanese government,” according to a statement issued by his office.

The protests were part of a “day of anger” called by supporters of Hariri to protest against Hezbollah which is funded and supported by Tehran.

The biggest protest took place in Mikati’s hometown, the northern city of Tripoli where medical sources said 20 people were treated for injuries and protesters set fire to a satellite truck used by the Qatar based television channel Al Jazeera.

The nomination of Najib Mikati as prime minister, endorsed by President Michel Suleiman, is seen a victory for Hezbollah, which secured the parliamentary votes needed to wrest control of the Lebanese government.

He also said “that all the talk of ( Mikati being ) a compromise candidate is an attempt to throw dust in the eyes…. there is no such thing as consensus candidate”