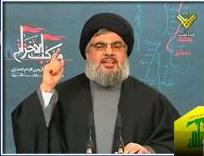 Hezbollah Secretary General Sayyed Hassan Nasrallah appeared on TV on Tuesday via video link and said that Lebanon should give Prime Minister designate Najib Mikati a chance, saying, “threats against Mikati will be useless”.

He denied that Hezbollah is seeking to control Lebanon or impose an Iranian project, adding that such accusations are meant to provoke foreign powers, including the US and Israel, against Lebanon.

“The greatest lie is accusing Hezbollah of seeking to control the state.” He said

Nasrallah attacked the West for supporting March 14 against March 8.

“Had the other camp’s candidate been appointed, you would have heard condemnations from the West. “ He said

Nasrallah said that March 14’s rejection to participate in the next cabinet would show that the alliance wants “to rule the country alone.”

He accused March for 14 of conspiring against Hezbollah:

“ You are the ones who led us to the internal scene, presented commitments to the U.S. against the Resistance, and brought on the July 2006 war against it and the STL”. He said in addressing March 14 alliance and added :“Let us be killed through guns aimed at our chests and not our backs.”

The protests were part of a “day of anger” called by supporters of Hariri to protest against Hezbollah which is funded and supported by Tehran.

The biggest protest took place in Mikati’s hometown, the northern city of Tripoli where medical sources said 20 people were treated for injuries and protesters set fire to a satellite truck used by the Qatar based television channel Al Jazeera.

The nomination of Najib Mikati as prime minister, endorsed by President Michel Suleiman, is seen a victory for Hezbollah, which secured the parliamentary votes needed to wrest control of the Lebanese government.

He also said “that all the talk of ( Mikati being ) a compromise candidate is an attempt to throw dust in the eyes…. there is no such thing as consensus candidate”