Protests across Lebanon against Hezbollah’s Mikati 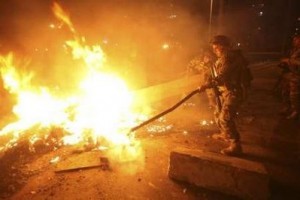 Protests broke out across Lebanon on Monday following the first day of the premiership consultations and after Hezbollah appears to have secured the support from a majority of parliament Monday to nominate its candidate former PM Najib Mikati for prime minister, putting the Iranian-backed militant group in position to control Lebanon’s new government.

Hundreds of people gathered on Monday in Tripoli to to denounce Mikati’s potential nomination and voiced support for Prime Minister Saad Hariri.

MTV reported that protests broke out across Beirut in support of Hariri for the country’s premiership, including in Tariq al-Jedideh and the Cola roundabout, while the Jnah-Sports City highway in the city was blocked with flaming tires.

MTV also reported that Chouf towns in Ikleem al-Kharroub, including Chehim, Barja, Darayya and Katarmaya are witnessing protests against Mikati’s nomination, with OTV reporting that Barja residents are blocking their town’s roads with burning tires.

Protests also broke out in Saida in the evening, MTV reported.

Hariri, the most popular Sunni leader, has vowed that he would not take part in a government headed by a candidate chosen by the Iranian and Syrian backed Hezbollah and its March 8 allies .

Protest in Tripoli on Tuesday

March 14 MP Khaled Daher called for a protest to be held in Tripoli’s al-Nour Square at 10 a.m. on Tuesday

Khaled Daher another March 14 MP said: “We call on those who reject the Persian scheme in this defiant Arab country to stage a sit-in tomorrow at 10:00 a.m. at the al-Nour Square in Tripoli.”

Sunni leaders have called for a “day of rage” throughout Lebanon Tuesday to protest gains by the Shiite militant group Hezbollah.

Top photo: Lebanese soldiers try to put out a fire lit by supporters of Lebanon’s caretaker Prime Minister Saad al-Hariri after a protest calling for him to remain as prime minister and form the new government, on a street in Beirut, January 24, 2011.