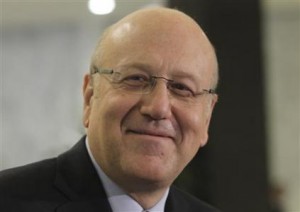 Lebanese telecoms tycoon Najib Mikati, who is backed by Hezbollah and its allies, moved into position on Monday to lead a new government after winning support from Druze leader Walid Jumblatt.

But caretaker Prime Minister Saad al-Hariri said he and his Future Movement would not take part in a government where the Shi’ite militant group has the upper hand.

Lebanon was plunged into political crisis after Hezbollah and its allies walked out of Hariri’s unity government on January 12 in a dispute over still-confidential indictments by a U.N.-backed tribunal which is investigating the 2005 killing of statesman Rafik al-Hariri, the premier’s father.

Hariri has stayed on in the interim and hoped to form a new coalition. But support from Jumblatt and six members of his parliamentary bloc — added to the 57 members of Hezbollah and their allies, plus Mikati himself — will give Mikati 65 votes in the 128-member parliament.

Hariri, a Sunni Muslim who has support from the United States and Saudi Arabia, said his supporters would not serve under a premier chosen by the Iranian-backed Shi’ite group.

“The Future Movement … rejects taking part in any government headed by a March 8 candidate,” his office said in a statement on Monday. The March 8 bloc includes Shi’ite movements Hezbollah and Amal, along with Christian leader Michel Aoun.

Hezbollah leader Sayyed Hassan Nasrallah has offered to accept any group within a cabinet led by Mikati, a Sunni businessman and politician — a post reserved under Lebanon’s constitution for a member of the Sunni community.

The collapse of Hariri’s government and political deadlock since then has deepened sectarian divisions in Lebanon, and the prospect of a government formed by Hezbollah will alarm Israel, which fought a month-long war with the militant group in 2006.

Israeli Vice Prime Minister Silvan Shalom said at the weekend there was a danger that an “Iranian government” will be established in Lebanon. He said Hezbollah “would no longer be merely a terrorist group operating with Iran’s backing, but a terrorist group in control of the country.”

Regional powers Saudi Arabia, Syria, Qatar and Turkey have failed to convince Lebanese leaders to agree to a compromise, and Hezbollah and its allies say no amount of international pressure would force them to accept Hariri’s leadership again.

MIKATI WAS BRIEFLY PREMIER IN 2005

Mikati served briefly as caretaker prime minister between April and July 2005, after Rafik al-Hariri’s death forced Syria to withdraw its troops from Lebanon.

In Lebanon’s power-sharing political system, the post of prime minister is reserved for a Sunni, the president a Maronite Christian and the speaker of parliament a Shi’ite.

The tension has pushed up the cost of insuring Lebanon’s debt against restructuring or default to an 18-month high of 367 points. But Lebanese stocks rallied on Monday, rising 2.0 percent, led by gains in real estate firm Solidere which has led the reconstruction of Beirut since Lebanon’s 1975-90 civil war.

The indictments at the heart of the latest dispute between Hezbollah and Hariri were filed secretly this month at a U.N.-backed court in The Hague. They are expected to accuse members of Hezbollah, which denies any role in the killing and says the tribunal is serving U.S. and Israeli interests.

Politicians allied to Hezbollah have said the first priority of a government they form would be to cut links with the court.

After meeting President Michel Suleiman on Monday, Mikati said that he would reach out to all parties in Lebanon if he were chosen. “I tell Prime Minister Saad al-Hariri, we are all one hand for the sake of Lebanon,” he told reporters.

Analysts say Hariri’s exclusion from government would cause resentment in Lebanon’s Sunni population, who see him as their main leader, and possibly spark violence. Another threat could come from violent Sunni factions, close to al Qaeda’s thinking, who regard Hezbollah as an arm of Shi’ite Iran.

Hundreds of Hariri supporters blocked some streets on Monday in Tripoli, a mainly Sunni Muslim city in Lebanon’s north, calling on Mikati to withdraw his nomination. Reuters