Why Egypt isn’t ready to have its own revolution 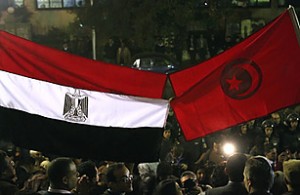 Many Arabs across the Middle East are looking to events in Tunisia for inspiration. It is the first of the region’s dictatorships to fall at the hands of its own people since 1979 — with no Islamist revolution needed; no U.S. invasion; no inspiring leader, just the mass uprising of a well-educated and disenchanted populace.

“A lot of people have been talking about Tunisia,” says one 57-year-old Cairo resident who only gave his name as Mohamed. “They had a bad president and the people were sick of him, so they overthrew him. Here, the people are sick too — more so than they were in Tunisia. Eventually here, they’re going to do it too.”

More than a few people in Egypt, the Arab world’s most populous country, agree with Mohamed. And some even believe the time is now. The Egyptian media has reported half a dozen cases of successful or attempted self-immolation over the past two weeks, all part of a copycat wave that has swept the politically stagnant streets of North Africa since 26-year-old Mohammad Bouazizi, an unemployed computer engineer, set himself on fire and became a martyr for the Tunisian cause. (See the the limits of the Tunisian domino theory.)

But in Egypt, it doesn’t go much deeper than that. “In Egypt, the prices have been rising for so long that we’ve grown thick skin,” says a shop owner who also identified himself only as Mohamed. “People here are already unemployed, and nothing has happened. Two guys burned themselves because they thought it would have the same impact here as it did in Tunisia. But nothing surprising has happened in Egypt.”

A greater percentage of Egypt’s population lives below the poverty line, compared to Tunisia, making Egyptians arguably more desperate. Egyptians have also suffered under a single despot for nearly three decades, compared to Tunisia’s two. The citizens of Egypt regularly complain of a neglectful regime that knows more about torture than it does about public service, and they’re furious with a regime that seems to swallow any domestic profits before they can reach the lower classes. And yet no one predicts a revolutionary reset anytime soon. Indeed, there seems to be a kind of political resignation about the efficacy of protests. “The people don’t take to the streets because they think that by demonstrating in the streets, nothing will happen, nothing will change,” explains Shadi Taha, a member of the opposition Tomorrow party.(See how Egypt’s opposition is seeking a new path.)

Two factors make Egypt different from Tunisia. First, Tunisia’s government spent generously on education, helping to establish the country’s middle class above many of its regional counterparts. The frustration of an educated but unemployed population was key to Tunisia’s revolt. (It was also key to the vast post-election crisis that overwhelmed Iran’s streets two years ago.) Egypt has allowed spending on education to decay over the decades — some analysts attributing that to a conscious calculation on Mubarak’s part.

In Egypt, teacher salaries are so low that it’s common for students to pay for private tutorials (often from the same teachers), and social critics have lamented that poor education has deprived generations of the skills needed to think critically — and to dissent. “The 80 million people have no power, no knowledge, and they are not organized,” one of Egypt’s most outspoken social critics, feminist writer Nawal el-Saadawi, remarked last year. “Change the education. Work on the mind of the people. There is no mind here.”

The other factor is the Army. In Tunisia, at a critical turning point, the Army took the side of the protesters in the street: it refused to fire on demonstrators. In Egypt, however, the military stands with Mubarak. The Interior Ministry, which runs the police, stands with Mubarak. Mubarak knows better than to falter on security, Egyptians say. “The government here is stronger than it was in Tunisia — that’s why people are scared,” says one Cairene citizen. “The jails are for people who protest these days. No one demands their rights anymore.”

Still, some argue that Egyptians have reason to feel emboldened. Unlike Tunisia, Egypt has a large, popular opposition group with a grassroots following: the Muslim Brotherhood. The Islamists failed to capture a single seat in November’s rigged parliamentary elections. But they’re still present, and they’re still angry. Conspicuously, however, they’re not pushing their followers into the streets in the immediate wake of the Tunisian revolution. Instead they have called for a national day of protests on Jan. 25, which will be nearly two weeks after the fall of President Zine El Abidine Ben Ali of Tunisia. It is, Egyptian observers say, a typically lackluster response to what appeared to be a golden opportunity.

Yet even that gesture is apparently not actually in response to Tunisia. “The date was set before what happened in Tunisia. The date was set from the beginning of January,” says Shadi Taha of the Tomorrow party, without answering the question of why opposition leaders hadn’t then moved the date up to take advantage of Tunisian momentum. He goes on, “No matter how strong the opposition is, if the people are not ready to go out and protest, not ready to go out and overthrow the government, there will be no revolution.” It is as if the party is abdicating its role in organizing dissent. “If there will be a revolution in this country, it will not be led by the opposition; it will be lead by the people.”

If so, revolution is going to take a while. Tunisian inspired protests remain small; and skepticism still reigns. “The people who burned themselves didn’t change anything,” says Mahmoud Gamal, a sandwich maker in downtown Cairo, who has witnessed countless small-scale protests down the street in front of parliament. “The police here have more control than they did in Tunisia. And the government here is stricter than they are there. In Tunisia, there was some form of cooperation between the Army and the people. But here, no one is standing with us — not the police, not the military. If you have someone to cooperate with you, then you can succeed.” Then he returns to his work, staring at a pile of eggplants that need to be diced. Time