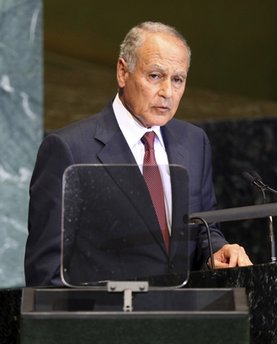 Egyptian Foreign Minister Ahmed Abul Gheit warned against messing with Lebanon during an interview with Kuwaiti newspaper Al-Rai to be published Friday.

Any party that wants to mess with its (stability) will have to confront several foes … Lebanese, Arabs and others,” he said .

He stressed that stability in Lebanon was “everyone’s essential demand.”

He said Egypt is in contact with the Lebanese parties, as well as with Arab and international parties to help preserve stability in Lebanon together with achieving justice,” in reference to the Special Tribunal for Lebanon indictment that was presented on Monday by STL prosecutor Daniel Bellemare to the Tribunal’s pre-trial judge

Asked about what Caretaker Prime Minister Saad Hariri’s next move should be , Abul Gheit said: “We believe that Sheikh Saad Hariri has taken constructive and positive stances for the sake of his country throughout the past months, and it will be unfair that he be asked to endorse stances that go beyond what he has already voiced.”

He added: “Egypt totally sympathizes with Saad Hariri’s position and appreciates his stances, and we believe that his vision for Lebanon can bring together the biggest number of his country’s parties, and it is a vision that is supported by Egypt. ”

but in an address to the Lebanese people Caretaker Prime Minsiter Saad Hariri said he decided to maintain his candidacy for premiership and accused the Iranian backed Hezbollah led opposition of trying to kick him out of political life .

He told the Lebanese people “One drop of blood of Lebanese citizens is more precious than anything else.

He said : “For this reason we decided not to take to the streets…. because we are committed to the constitution and added :”Taking to the streets is not a nationalistic rhetoric.”, In reference to the Hezbollah and Amal gatherings on Tuesday