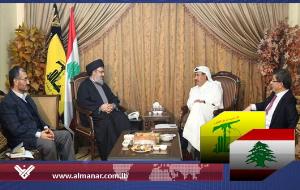 Turkish FM Ahmet Davutoglu and Qatari FM Sheikh Hamad bin Jassem bin Jaber al-Thani (who is also the prime minister) met overnight in a secret location Hezbollah Secetary General Sayyed Hassan Nasrallah in the presence of his adviser Hajj Hassan Khalil . The talks reportedly focused on the political crisis, according to a statement by Hezbollah.

“The meeting addressed the current political crisis in Lebanon, notably the issue of the international tribunal and the new government,” the statement said.

Prior to the meeting with Hezbollah the Qatar and Turkish officials held a 4 hour meeting with caretaker Prime Minister Saad Hariri , their talks reportedly focused on the Special tribunal for Lebanon (STL) indictments.

This comes after Saudi Arabia abandoned its efforts to mediate in Lebanon’s political crisis. Saud al-Faisal, Saudi Arabia’s foreign minister, told the Saudi-owned Al-Arabiya TV in an interview on Wednesday that the Saudi king decided to withdraw his hand from Lebanon, after Hezbollah quit the government last week.

Asked about the situation in Lebanon, al-Faisal said that “It’s dangerous, particularly if it reaches separatism or the division of Lebanon. This would mean the end of Lebanon as a model of peaceful coexistence between religions and ethnicities and different factions.”

Davutoglu and Sheikh Hamad arrived in Beirut on Tuesday to address the political situation and met with President Michel Suleiman, Prime Minister Hariri and Speaker Nabih Berri. They made no statements to the press following their Tuesday meetings.

Davutoglu and Sheikh Hamad participated in a meeting on the Lebanon crisis in Damascus on Monday.

An-Nahar newspaper reported on Wednesday the talks of the Qatar and Turkish visiting officials with Lebanese government officials focused on two points:

– Preparing for parliamentary consultations to designate the next prime minister.

According to An-Nahar, ran into a new set of conditions imposed by the Hezbollah-led opposition as a result of the STL indictment .

The U.N. tribunal investigating the assassination of a former Lebanese prime minister warned against speculating about the sealed indictment Tuesday as a quiet show of force by Hezbollah in downtown Beirut rattled nerves amid fears the militant group will react violently if accused.

Hezbollah has demanded that Lebanon reject the tribunal and on January 12 withdrew from the cabinet with its allies, causing the government’s collapse.

The Special Tribunal for Lebanon was set up to try the killers of former PM Rafik Hariri, insisted on keeping its first indictment confidential .

Bellemare warned yesterday during a video presentation that speculation on the indictment, which is widely believed to implicate Hezbollah, would be “counter-productive.”

Davutoglu and Sheikh Hamad are expected to meet on Wednesday with Lebanese politicians from both the majority March 8 coalition and the Hezbollah-led March 8 alliance. A meeting with MP Walid Jumblat is also on their agenda.