Suleiman: Responsibility for ending crisis rests on our shoulders 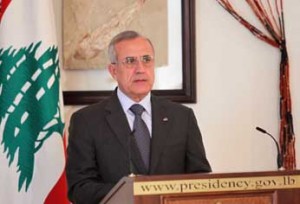 Suleiman stressed that there is still a chance for a settlement despite the current tensions over the U.N.-backed Special Tribunal for Lebanon (STL) , probing the 2005 killing of former Lebanese Prime Minister Rafik Hariri.

Suleiman also  stressed that despite his appreciation for the mediation by the Arab leaders , the primary responsibility to solve the political crisis rests on the the shoulders of   the Lebanese.

“We still have the opportunity despite the current polarization to prove our ability to manage our own affairs by ourselves and take bold and wise choices that would lead us again to the paths of stability, justice, growth and economic and social development,” he added

His speech came hours after he decided to postpone for one week the parliamentary consultations for nominating a new prime minister to lead the new cabinet.

The two-day consultations were scheduled to begin Monday

Earlier on Monday it was reported that  caretaker Prime Minister Saad Hariri was against postponing parliamentary consultations .

Future TV quoted on Monday an unnamed source as saying that postponing the parliamentary consultations to nominate a new premier served the interest of Hezbollah-led March 8 coalition.

The postponement was reportedly requested by the March 8 coalition.

The Phalange party, a key member of March 14 alliance  labeled the postponement as “inappropriate because it is difficult to tamper with constitutional events.”

Lebanese Forces leader Samir Geagea, another key member of March 14 alliance  expressed his regret over the delay in consultations and “going back on official dates under pressure, threats, and external interference aimed at pushing caretaker Prime Minister Hariri to accept in advance what he previously rejected.”

“The reasons for delaying the deliberations are very clear and easy. After it became clear that … Hariri will be re-nominated, extensive pressures were exerted from inside and outside to prevent the nomination of Hariri. They are disrupting the democratic game to achieve their goals,” Geagea said after chairing a meeting for the L.F. parliamentary bloc at his residence in Maarab.

Ya Libnan correspondent reported that the opposition is still trying to pressure MP Walid Jumblatt who has the decisive vote to switch allegiance.

Hariri’s “March 14″ coalition won a majority in the 128-seat assembly in a 2009 election, but Jumblatt who was a central figure in the Cedar Revolution has since defected.

At best Jumblatt can switch himself and 5 other members, according to local observers…. in this case: