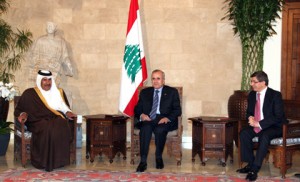 Qatar’s Prime Minister and Minister of Foreign Affairs Sheikh Hamad bin Jassem al-Thani and Turkish Foreign Minister Ahmet Davutoglu arrived in Beirut Tuesday for talks with Lebanon’s top leaders to try and resolve the the political crisis in the country.

Both diplomats met already with Lebanese President Michel Suleiman at the Baabda Palace and then headed to Ain el Tinah to meet with Speaker Nabih Berri . They did not make any statements after their meeting.

According to a statement issued by the president’s press office, President Suleiman described the talks as useful .

Following their meeting with Berri they met with caretaker PM Saad Hariri .

Berri issued a statement after his meeting with the Qatari and Turkish officials in which he said the Syrian-Saudi role in resolving the Lebanese political crisis is very important.

“There are some complexities, but issues are being discussed,” Berri said 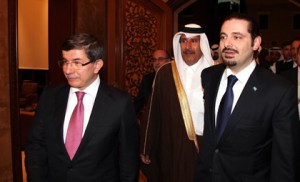 According to a statement issued by Hariri’s press office,” the PM discussed with his Qatari counterpart and Davutoglu how to implement the results of the Syrian-Qatari-Turkish summit held in Damascus on Monday.”

The Qatari and Turkish officials arrived from Damascus where they participated in a meeting on the Lebanon crisis in Damascus on Monday.