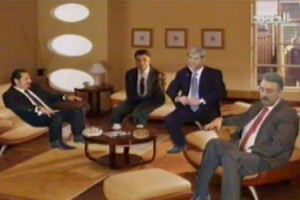 “The conversation was made in order to verify the truth behind the remarks made by Siddiq,” who has been accused of misleading the investigation into the Rafik Hariri murder.

The statement said that only certain parts of the conversation were aired by New TV, adding that “it does not change the course of the investigation.”

“The relevant Lebanese authorities have informed the international commission that Siddiq’s statements were unfounded and the commission decided that he should be interviewed to uncover the truth behind his remarks.” Said the statement

The statement also added that the New TV broadcast was an intelligence operation “par excellence.”

The TV station said the broadcast was intended to show a link between Hariri and Siddiq, whom March 8 forces describe as a false witness and the international tribunal does not recognize.

New TV , known for its pro Syrian views accused the caretaker premier of “hiding the truth and playing with the bloods of February 14 martyrs” in reference to the bombing that killed the former PM and 22 others.

According to the audiotape, Siddiq told Hariri that the international commission should name nine Syrians and four Lebanese in the murder of his father, Rafik Hariri.

The former Syrian intelligence agent also hinted that Damascus was behind the killing. But Hariri asked for proof of Syria’s alleged involvement.