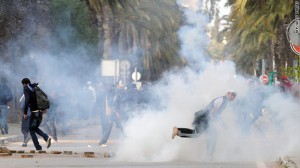 Tunisia’s president — whose government has been embattled by weeks of street protests over poor living conditions and repression of rights — has dissolved the country’s government and declared a state of emergency, state TV said Friday.

President Zine El Abidine Ben Ali, who announced concessions to meet some grievances the day before in a nationally televised TV address, made the moves in reaction to the instability in the North African country.

Officials said the reason for the emergency declaration is to protect Tunisians and their private property. People are not allowed on the street from 5 p.m. to 7 a.m.

People in gatherings of three or more people will be arrested or they will be fired on if they try to run away and can’t be stopped.

Ben Ali also will call for parliamentary elections within six months. The government sacking comes days after the president dumped the interior minister and fired a couple of aides.

Earlier Friday, police, wielding batons and firing tear gas, dispersed demonstrators, a show of force that aggravated a peaceful gathering in the capital.

Security forces were seen brutally beating protesters, and the demonstrators fled amid the security show of force. Fires were seen in the center of Tunis and downtown, and smoke was coming from a couple of locations.

The unrest underscores concerns among Tunisians and in the international community that security forces have been badly overreacting to peaceful gatherings.

Earlier, thousands congregated in front of the Interior Ministry and chanted slogans such as “Get out!” and “Freedom for Tunisia!”

Haykal Maki, a pro-opposition lawyer who was in the throng, said protesters want a “regime change,” the resignation of Ben Ali and lawsuits addressing the regime’s corruption.

Tunisia has been wracked by angry demonstrations, with people protesting high unemployment, alleged corruption, rising prices and a limitations on rights.

The wave of protests was sparked by the suicide of an unemployed college graduate, a man who torched himself in December after police confiscated his fruit cart, cutting off his source of income.

Ben Ali addressed the crisis in an address on national TV Thursday night as street unrest percolated and a message purportedly from an al Qaeda affiliate announced its support of protesters.

He vowed to cut prices of basic foodstuffs, to lift censorship and to ensure police do not use live ammunition except in self-defense, and he indicated that he will not run again for president.

There was no evidence that live ammunition was used in Tunis on Friday to disperse the crowd.

“Enough violence,” Ben Ali said after days of riots that have killed at least 21 people.

“I also gave orders to the interior minister … not to use live ammunition. It is unacceptable and unjustified unless someone uses his weapon and forces you to defend yourself.”

Ben Ali said he had asked the prime minister to reduce prices of staples, including sugar, milk and bread and said he had decided to give “complete freedom to all media outlets … as long as they respect our values and the value of the profession.”

The 74-year-old president added that he would not push to change the law setting an age limit for presidential candidates in the next election in 2014.

By then, he would have exceeded the 75-year age limit. “There will not be presidency for life,” he said.

Organized mainly by the country’s lawyers’ union mainly and other unions, Friday’s demonstration on came under the watchful eye of a contingent of riot police officers.

But the protesters freely were not shy about slamming the government and Ben Ali. Demonstrators shouted “Public trial for the president’s family!” and “Yes to water and bread, but no to Ben Ali!”

Reem Ben Yousef, a 37-year-old university professor, told CNN the protesters say the ruling family has robbed citizens and they want them to depart from public life.

Reem said that Ben Ali’s address was staged and was cynical about the presence of a pro-government demonstration after his speech.

“We do not believe in Ben Ali and his regime,” she said.