Lebanon’s Hariri: No alternative to dialogue 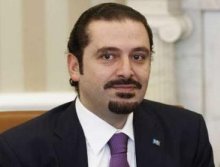 Lebanon’s caretaker Prime Minister Saad al-Hariri said on Friday that the country’s rival political factions had no alternative to dialogue after the collapse of his “unity government” this week.

“There is no alternative for all of us to dialogue, and no side in Lebanon will be able to eliminate the other,” Hariri said in his first public comments since Hezbollah and its allies resigned and brought down the government on Wednesday.

Hariri said he would work with President Michel Suleiman, who will start consultations on Monday to form a new government, but did not specify whether he would be a candidate for the post of prime minister.

“I will stick to my commitment to open up to cooperation with the president and all leaderships on the basis of continuous dialogue and reaching logical solutions for our common issues, no matter how complicated it is,” he said.

Hariri was speaking after returning from an international tour including the United States, France and Turkey.