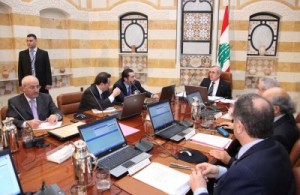 President Michel Suleiman will likely issue a decree requesting Prime Minister Saad Hariri to lead a caretaker cabinet once the he returns to Beirut, according to a presidential source , adding it would be unethical to do it tonight while Hariri is away.

Once the decree is issued, Suleiman will set an appointment for parliamentary consultations, the source added.

The cabinet’s collapse is over the Special Tribunal for Lebanon (STL) probing the 2005 assassination of former Prime Minister Rafik Hariri. Unconfirmed reports indicate that Hezbollah members will be soon indicted by STL.

The ministers of Hezbollah and its allies resigned as Hariri was meeting with US president Barack Obama at the White House. Following the meeting on Wednesday , Hariri left Washington , DC to Paris to meet with French President Nicolas Sarkozy.

March 14 General Secretariat coordinator Fares Soueid said on Wednesday evening :” Prime Minister Saad al-Hariri did not come as a compromise prime minister, he came as a prime minister because of of the will of the people who elected him in the last parliamentary elections.”

Soueid Stressed that the “resignation of the Ministers of March 8 is a deliberate escalation against the International Tribunal.”

He Said, what happened is a deliberate attempt to impose conditions from within and outside the institutions adding that “the resignation means the refusal of the other team to live with another team in a single government.”

The former Lebanese premier and current Future Movement parliamentary bloc leader MP Fouad Siniora, told Al Arabiya TV on Wednesday evening : Based on all available data there is no substitute for Saad Hariri to head the new government.