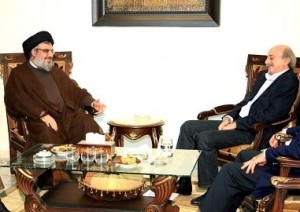 Al Manar TV also reported that Nasrallah and Jumblatt discussed the result of Syrian-Saudi efforts to resolve the Lebanese impasse.

Al-Manar also reported that Nasrallah will soon make an appearance to speak about the developments.

Lebanon’s president asked Saad Hariri to stay on as caretaker prime minister on Thursday after Hezbollah ministers and their allies resigned in a dispute over an investigation into the killing of Hariri’s father. A statement issued by President Michel Suleiman called on the government to “continue in a caretaker capacity until a new government is formed”.

Hezbollah according to reports has someone else in mind to lead the new government . Hezbollah MP Mohammed Raad unveiled on Thursday that the March 8 forces will name a personality with a history of national resistance to head the new government . Raad told reporters after meeting former President Emile Lahoud in response to a question on who will that be : “A personality with a national resistance biography, ” Raad said.

Jumblatt told AFP on Thursday that it is too early to say whom his Democratic Gathering parliamentary bloc will nominate for the country’s premiership.

“When the consultations on naming a new premier begin, we’ll see.” He said

Hariri’s “March 14″ coalition won a majority in the 128-seat assembly in a 2009 election, but Jumblatt who was a central figure in the Cedar Revolution has since defected. He claimed initially that he will be a centrist , but during the past few months he has been leaning more towards the Hezbollah led opposition, but…. unlike Hezbollah and its allies his 3 ministers did not resign from the cabinet on Wednesday.

Political observers of the Shouf area believe that Jumblatt has no choice other than Hariri if he wants to be reelected to the parliament next time . The observers strongly believe that Jumblatt’s popularity,( as a result of his defection ) is at such low point within the Druze community that any wrong move on his part could force his bloc to fire him as the bloc leader. According to the observers the majority of the MPS in the bloc maintain excellent relations with March 14 alliance .