Saudi Arabia and Syria have failed to reach a deal aimed at curbing political tension in Lebanon over the 2005 killing of Rafik al-Hariri, Lebanese Christian politician Michel Aoun said on Tuesday.

The Saudi and Syrian initiative “has ended without a result,” Aoun told a televised news conference.

Saudi Arabia and Syria, powerful regional players who have traditionally backed rival camps in Lebanon, have worked since July to forge a compromise which would curb tensions over the U.N.-backed tribunal investigating Hariri’s killing.

However, he said that the March 8 coalition is discussing with President Michel Suleiman ways to resolve the crisis.

“We informed our colleagues in Hezbollah and the Amal Movement of the initiative’s failures, and we are looking for a way to resolve the crisis with Suleiman. We will announce the result of the discussions once we reach it,” he said, adding, “The solution today has become Lebanese-Lebanese.” 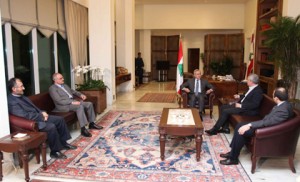 Aoun also called for a cabinet meeting in which ministers can propose their ideas on ways to end the political impasse.