5,250 more Palestinians to work in Israel 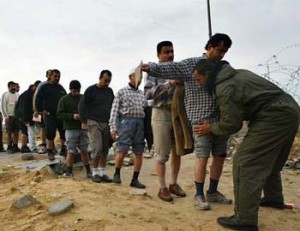 Israeli Prime Minister Binyamin Netanyahu on Wednesday gave his support for a proposal to increase the number of Palestinian workers allowed to work in Israel, Israeli newspaper Jerusalem Post reported .

The plan according to the report was put forward by Industry, Trade and Labor Minister Binyamin Ben-Eliezer who has requested an increase in the number of West Bank workers in Israel a number of times.

According to the plan, 4,000 Palestinians will be given permits to work in construction and 1,250 in agriculture, making total of 5,250 workers, all West Bank residents.

According to the report Ben-Eliezer’s proposal will be discussed this coming Sunday by the cabinet. The Industry, Trade and Labor Ministry reported that as well as Netanyahu, Defense Minister Ehud Barak and Minister of Housing and Construction Ariel Atias were also expected to support the initiative.

“In addition to the help it will give to the construction and agriculture industries, the process also represents an important step forward in the relationship between us and the Palestinians,” Ben-Eliezer said.

“Palestinian workers, in contrast to foreign workers, return to their homes every day, and this is significantly more preferable to us,” he added.

Ben-Eliezer explained “At the same time, my ministry is trying to professionally train as many Israelis as possible in the field of construction.”