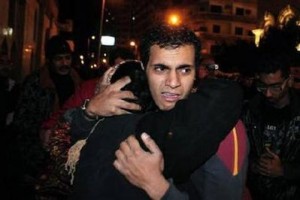 “President Hosni Mubarak has been following up on the criminal terrorist act from the moment it occurred and throughout the night and until dawn today,” the state-run MENA news agency reported.

Mubarak “calls on children of Egypt – Copts and Muslims – to close ranks and confront the forces of terrorism and those who want to undermine the security, stability and unity of the children of this nation,” MENA said.

At least 21 people were killed after midnight when a car exploded as the faithful emerged from mass at Al-Qiddissine (The Saints) church in the Sidi Bechr district of Alexandria, Egypt’s second city, a health official said.

The attack targeted a Coptic church, Egypt’s largest Christian community and the biggest in the Middle East.

There was no immediate responsibility for the attack but Al-Qaeda’s Iraq affiliate threatened Egypt’s Copts late last year after claiming an attack on Baghdad church on October 31 that left 44 worshippers, two priests and seven security forces dead.

In a televised speech, Mubarak accused “foreign hands” of carrying out the deadly attack.

“It is a terrorist operation that is alien to us,” he said, pledging that his government will track down the culprits and urging Muslims and Christians to close ranks. “All of Egypt is targeted. This blind terrorism does not differentiate between Copts and Muslims,” said the president.

“We will all cut off the head of the snake, confront terrorism and defeat it,” he said. “You are terribly mistaken if you believe that you can hide from the punishment of the Egyptian people,” he said, addressing the still-unknown assailants.

Top photo: An Egyptian Christian grieves with his mother after a car bomb exploded in front of a Coptic Christian church in Alexandria January 1, 2011.