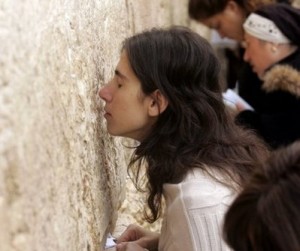 A letter from about 30 prominent rabbis’ wives was causing a stir in Israel Wednesday because it urges Israeli girls not to date Arabs.

The open letter comes three weeks after the uproar caused by another letter, which was written by 50 state-appointed rabbis and told Jews not to rent or sell property to non-Jews.

The latest missive, which was published by some websites and news outlets, says Arab men act polite around Jewish girls and “act as if they really care about you,” but it says that’s a ruse. The men, it says, even change their Arab names to Hebrew forms like Yossi and Ami in order to get close to the girls.

“This behavior is temporary,” the letter says. “As soon as you are in their hands, in their villages under their control, everything becomes different. You can ask dozens of girls who have been there. They will tell you it is all an act.

It urges Jewish girls not to go out with non-Jews or work in places that employ non-Jews.

“Your grandmothers never dreamt that their descendants would do something that will take the next generations of her family out of the Jewish people,” it says.

The letter was initiated by the head of Lehava, an extreme right-wing group that says it aims to prevent the “assimilation of the Jewish people” and works at “saving Jewish girls from Arab villages.”

“It’s known that girls who go out with Arabs are beaten, these girls are in danger. … There is a violent social trend and everyone ignores it,” said the head of the group, Anat Gopstein, in a radio interview Wednesday morning.

The head of Israel’s Reform movement, Rabbi Gilad Kariv, harshly condemned the letter and said, “Israeli society is falling into a deep, dark pit of racism and xenophobia,” according to spokeswoman Yuli Goren.

More than 30 female rabbis from the Reform movement published a counter-letter harshly condemning the one released Wednesday, Goren said. Kariv also called on Prime Minister Benjamin Netanyahu and Justice Minister Yaacov Neeman to speak out against it.

Among the rabbis’ wives who signed the letter is Nitzchia Yossef, the daughter-in-law of Rabbi Ovadia Yosef, the spiritual leader of the ultra-orthodox Shas political party. Esther Lior, the wife of extreme right-wing Rabbi Dov Lior, was another signatory.

Rabbi Yosef was one of the authors of the letter written earlier this month that urged Jews not to sell or rent property to non-Jews. It prompted widespread condemnation from politicians, human rights groups and leading rabbis in both Israel and the United States.

The letter, which was distributed to synagogues and published in some religious newspapers, had warned that those who defied the religious ruling should be ostracized. It said if one apartment is taken by a non-Jew, it devalues all the neighbors’ apartments.

More than 800 rabbis from around the world signed a petition against the letter, saying “statements like these do great damage to our efforts to encourage people to love and support Israel.”

The petition said “the attempt to root discriminatory policies based on religion or ethnicity in Torah is a painful distortion of our tradition. Am Yisrael (the Jewish people) knows the sting of discrimination, and we still bear the scars of hatred. When those who represent the official rabbinic leadership of the state of Israel express such positions, we are distressed by this … desecration of God’s name.”

Nearly 1.5 million Arab residents live inside Israel, making up 23% of the population.

A poll published Tuesday by the Hebrew University in Jerusalem showed that 48% of Israelis oppose the call to avoid renting or selling property to Arabs. CNN