by yalibnan
716
As Lebanon braces for a U.N. tribunal to announce indictments in the 2005 assassination of Rafiq al-Hariri, one key suspect is beyond the scope of any court of law.
Share: 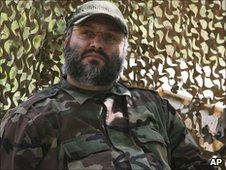 As Lebanon braces for a U.N. tribunal to announce indictments in the 2005 assassination of Rafiq al-Hariri, one key suspect is beyond the scope of any court of law.

Imad Mughniyeh, Hezbollah’s chief of operations until his own assassination in Damascus in 2008, likely played a role in the massive car bombing that claimed the lives of the former Lebanese prime minister and 22 others in Beirut. Experts on Lebanon and Hezbollah say it is difficult to envision a crime of such scale and consequence without Mughniyeh’s involvement.

“My guess is no,” said Mona Yacoubian, director of the Lebanon Working Group at the U.S. Institute of Peace (USIP), asked if the Hariri assassination could have been pulled off without Mughniyeh’s knowledge. She added, “It would be hard to know how it could have been done without the connivance of Syria given its role in Lebanon in 2005.”

After a three-year investigation by a U.N. special tribunal, much more is known about the assassination of Hariri than the death of Mughniyeh. Press reports have linked Hezbollah to cell phones used by the Hariri plotters. Yacoubian and other Lebanon analysts say indictments are expected against as many as half a dozen Hezbollah operatives as soon as this month or early next year.

Hezbollah has reacted defiantly, suggesting without any evidence that Israel was somehow involved in Hariri’s murder. Hassan Nasrallah, the group’s leader, threatened last month to “cut off the hand” of anyone who tries to arrest a militia member.

But the Syrians, nervous at first that they would be blamed given well-publicized differences between Hariri and Syrian President Bashar al-Assad, now seem to believe that the tribunal will leave the regime alone despite its long, complicated relationship with the Lebanese Shiite group. “There have been no indications that Syrians are among the list of indicted names,” says Joshua Landis, a Syria expert who directs the Center for Middle East Studies at the University of Oklahoma.

Could that be in part because Mughniyeh was involved and he is now in no position to speak?

Landis doubts Syrian responsibility for Mughniyeh’s death, noting that he was considered a “hero” in Syria for his role in helping to chase Israel from southern Lebanon. “For the Syrians to kill their own hero — even for the most wizened Mukhabarat — would be very demoralizing,” Landis said, using the Arabic term for secret police. “On the other hand, it makes perfect sense for Israel or America” given the number of Americans, Israelis, and Jews Mughniyeh helped kill.

Still, questions continue to swirl around the death of Mughniyeh, a master terrorist who served both Iranian and Syrian masters in Lebanon and elsewhere in the Middle East and beyond. Born in southern Lebanon in 1962, he began his militant career in the 1970s as a bodyguard in Beirut for Palestinian leader Yasir Arafat, having been “discovered” by Arafat aide Khalil al-Wazir, also known as Abu Jihad. Mughniyeh later also served as a bodyguard for Sheikh Muhammed Hussein Fadlallah, the Shiite cleric who was close to Hezbollah and had a wide following in Lebanon until his death earlier this year.

Mughniyeh went on to become a seminal player in Hezbollah-linked international terrorism, implicated in attacks that killed hundreds of Americans, including 241 Marines in their Beirut barracks in 1983 and U.S. Navy diver Robert Stethem during the 1985 hijacking of TWA Flight 847. Mughniyeh was also implicated in attacks on Argentine Jews in the early 1990s in apparent retaliation for the Israeli assassination in Lebanon in 1992 of Abbas al-Musawi, Hezbollah’s leader prior to Nasrallah. Before the Sept. 11 attacks, U.S. authorities had put Mughniyeh at the very top of the U.S. wanted list.

Until his murder, however, few had even seen Mughniyeh’s picture. After his death, posters of a chubby bearded man in camouflage resembling an Islamic Rob Reiner suddenly plastered the southern suburbs of Beirut and streets in the Iranian capital, Tehran.

Mughniyeh died on the evening of Feb. 12, 2008, shortly after he left an Iranian reception marking the 29th anniversary of the Iranian revolution. According to witnesses quoted at the time by the Washington Post, a powerful bomb detonated in his Mitsubishi Pajero as he stepped into the car. The blast shattered Mugniyeh’s body and hurled parts into a building entrance 15 feet away.

His violent death in an upscale Damascus neighborhood not known for such attacks created a crisis in Iranian-Syrian relations, a fact that has been underlined by recent WikiLeaks disclosures.

Even though both Iran and Syria publicly blamed Israel and the United States for the killing, Iran said it would mount an independent investigation. The results of that probe — if it ever took place — have never been announced. Likewise, Syria has never announced the results of its own investigation.

A Dec. 22, 2009, cable to the State Department signed by the chargé d’affaires in Damascus, Chuck Hunter, noted that Qassem Suleimani, the head of the elite Quds force of Iran’s Revolutionary Guards, had just visited Syria for the first time in months accompanying a high-level delegation led by Iranian national security advisor Saeed Jalili. (The U.S. Treasury Department designated Quds force a terrorist entity in October 2007.)

“Reportedly accompanying Jalili, Soleimani returned to Damascus after a long absence, perhaps a reflection of lingering tensions between Iran and Syria that erupted after the February 2008 assassination of Hizballah military strategist Imad Mugniyah in the Syrian capital,” the cable said, using alternate spellings of Hezbollah and Suleimani. “‘Soleimani represents the business end of the resistance,’ commented [name withheld], also reluctant to discuss the sensitive issue of Iranian-Syrian-Hizballah military cooperation.”

Randa Slim, an independent consultant and former scholar at USIP who has extensive contacts with Hezbollah officials, says that for six months after Mughniyeh’s death, Hezbollah forbade senior cadres from going to Damascus.

The Guardian newspaper, in a Dec. 7 article, wrote that the Saudi ambassador to Lebanon, Abdel Aziz Khoja, told U.S. diplomats in Beirut in 2008 that Hezbollah believed Syria was responsible for Mughniyeh’s killing.

The Saudi envoy noted that no Syrian official attended Mughniyeh’s funeral in Beirut. He said that Iran sent its foreign minister, who “had come to calm down Hezbollah and keep it from taking action against Syria.”

Did the Syrians kill Mughniyeh or conveniently step aside to allow Israelis or the CIA to do the deed? No one is likely ever to know for sure.

Meanwhile, the chances that others involved in Hariri’s death will face justice even in absentia also appear remote. U.N. officials plan to try to keep the indictments confidential for several weeks to allow time for the evidence to be evaluated, but the names are likely to leak.

Slim told an audience at USIP in Washington on Dec. 8 that after the indictments are known, “Most likely these people will be whisked to Syria and put on a plane to Iran and we’ll never hear of them again.”