Muslim student at Catholic university: You can find Allah anywhere

by yalibnan
2399
In the past few years, enrollment of Muslim students has spiked at Catholic campuses across the USA, according to this Washington Post report
Share: 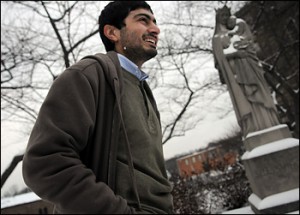 On a quick break between classes last week, Reef Al-Shabnan slipped into an empty room at Catholic University to start her daily prayers to Allah.

In one corner was a life-size painting of Jesus carrying the cross. In another, the portrait of a late priest and theologian looked on. And high above the room hung a small wooden crucifix.

This was not, Shabnan acknowledged, the ideal space for a Muslim to pray in. After her more than two years on campus, though, it has become routine and sacred in its own way. You can find Allah anywhere, the 19-year-old from Saudi Arabia said, even at the flagship university of the U.S. Catholic world.

One of the sharpest increases in Muslims students has been at Catholic University in Northeast Washington. In the past five years, as the number of self-identified Catholics on the campus has decreased, the number of Muslims has more than doubled, from 41 in 2006 to 91 this fall.

The largest group of international students by far now comes from Saudi Arabia.

Muslim students say they enroll at Catholic schools for many of the same reasons as their classmates: attractive campuses, appealing professors and academic programs that fit their interests. But there is also a spiritual attraction to the values that overlap the two faiths.

“Because it is an overtly religious place, it’s not strange or weird to care about your religion here, to pray and make God a priority,” said Shabnan, a political science major who often covers her head with a pale beige scarf. “They have the same values we do.”

A place to pray

At the same time, Muslim students find themselves immersed in what can seem at times alien iconography. Almost every classroom is adorned with a crucifix. Statues of the Virgin Mary and Holy Child dot the campus. Professors often open their classes with an appeal to Jesus. Courses in theology are an undergraduate requirement.

That’s how Shabnan found herself buying her first Bible, for a required Old Testament class. It’s also the reason, she said with a smile, that she registered for an introductory course on Islam.

“I was looking for an easy course,” she said. “I learned a lot that was new to me . . . and just seeing how someone completely outside our religion views it was fascinating.”

But there are also drawbacks to being Muslim on an overwhelmingly Catholic campus.

Most of the students eat everything but the pork in the student union. For the more orthodox, eating can be a tricky proposition that involves driving as far as Potomac to find halal meat, which is slaughtered according to strict guidelines.

Although other Catholic schools have established prayer rooms and student associations for their growing Muslim populations, Catholic University has neither. For their five daily prayers, Muslims often scramble to find empty classrooms where they can kneel, face Mecca and bow before God.

Some students meditate in the school’s chapels and at the cathedral that looms over the entire campus – the Basilica of the National Shrine of the Immaculate Conception.

During his more than four years as a graduate student at Catholic, Ali Basiri has become one of the regulars at the small chapel in Caldwell Hall, the oldest building on campus. Basiri, 27, has spent so much time in the chapel’s pews that he has befriended the organist who practices there.

It took him a while to adjust to life outside Iran. During his first semester, he lived in the dorms and tried not to be shocked when women held out their hands to shake his and sometimes hugged him.

In Iran, Basiri said, all schools run by the Islamic government are religious. The Iranian university where he studied for his bachelor’s degree was named after a Muslim cleric, and his engineering department had detailed rules for praying and a dedicated room separated for men and women by blankets.

But at Catholic, he has forged new ways to connect spiritually. Several times a week, the electrical engineering student makes his way past the marble statue of the Virgin Mary at the Caldwell chapel entrance and listens in the pews to Islamic prayers on his MP3 player.

“I feel there is something powerful here because people are thinking about God all the time and not just about their own life or studies,” Basiri said.

He has struck up friendships with equally fervent Catholic believers.

“We do this thing where he teaches me his prayers in Arabic, and I share with him the prayers I say as a Catholic,” said one of his friends, Kenny White, 20, a sophomore from Annapolis. “I’ve learned about God by learning about him and his own faith. It’s been a really important and beautiful part of being here.”

‘Proud of who we are’

It was that kind of exchange that prompted Basiri’s attempts to start a Muslim student association. He wanted to help Muslim students connect and gather for prayer in addition to helping spur conversations across religions.

Then, an administrator pulled him aside and said it wouldn’t work to have a Muslim group at such a major Catholic institution.

When asked about the experience, Basiri is hesitant to say anything negative about a school that he says has embraced him so fully and given him a chance to grow in faith and academics.

“I understand the difficulty,” he said. “In Iran, if you tried to start a Catholic group at a Muslim university, that would be just as strange and hard to make it work.”

Many other Catholic schools with rising numbers of Muslim students have set up prayer rooms and formed Muslim student associations.

Georgetown University, whose Muslim student numbers have also been climbing, has a prayer room, student association and an entire center devoted to Muslim-Christian understanding, and the school hired a full-time Muslim chaplain in 1999. Catholic administrators at colleges that have added similar features say they haven’t perceived the efforts as a challenge to their religious identity.

“We’re not going to take down the cross or change our name. We’re proud of who we are,” said Marco Masini, associate vice president of student life at Benedictine University in Illinois. “Hospitality is a part of the Benedictine philosophy, so it’s important we welcome individuals of all faiths.”

When Catholic University has declined to officially recognize other student groups, such as a gay advocacy organization, it has been because their beliefs run contrary to church teaching. University President John Garvey said that although other religious services aren’t offered at Catholic, its campus ministry collects information from nearby religious centers and offers those connections to students.

“I think there’s a lot of benefits to having students of other faiths here,” he said. “They bring the grace of many of their own religious traditions.”

Muslim students there say they have benefited as well. In his years at Catholic, Basiri said, he has experienced a long list of firsts: meeting a nun and priest, celebrating Mass, witnessing Easter and Thanksgiving.

Basiri said his Islamic faith has grown and matured in the past four years while studying in buildings named after Catholic leaders, in classrooms adorned with crucifixes, and with classmates often named after saints.

“The face of my prophet and my God has changed,” he said. “It is even more beautiful now.”