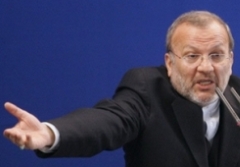 Iran’s former foreign minister indirectly criticized the president Sunday for abruptly firing him last week during the middle of an official visit to Africa, saying his dismissal was “undiplomatic , un-Islamic and offensive” and caught him unaware.

President Mahmoud Ahmadinejad announced the decision to fire Manouchehr Mottaki while he was on a diplomatic mission to Senegal. He appointed nuclear chief Ali Akbar Salehi as acting foreign minister.

Mottaki added his criticism to an outcry by parliament members who rival Ahmadinejad from within his own conservative camp. He told Iran’s Mehr new agency that he was “never informed” about the dismissal before or while on his trip.

On Saturday, Mohammad Reza Rahimi, Iran’s first vice president, claimed during a farewell ceremony for Mottaki that he knew he was going to be replaced ahead of his Africa trip. Mottaki did not attend the ceremony and said Sunday he was not informed about it. He called the process “ridiculous.”

He said he met Ahmadinejad before leaving for Africa but nobody told him he was about to be dismissed.

There was more criticism of Ahmadinejad in parliament on Sunday, after an outcry last week.

Ali Larijani, parliament speaker and a close ally of Mottaki, said during a speech in an open session of parliament that he appreciated Mottaki’s service.

“The right way was that the change should have happened with prudence and observing dignity and not during the visit,” Larijani said.

Ali Motahari, one of the lawmakers opposed to Ahmadinejad, told Khabaronline news website Sunday that Mottaki learned about his dismissal from Senegalese President Abdoulaye Wade.

“The President (Ahmadinejad) did not have such a right. I hope he will have convincing response for this,” he said. AP