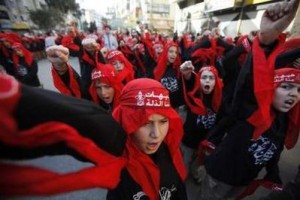 Nasrallah urged his supporters during his speeches ( last night and this morning) to commemorate Ashura.

Dressed uniformly in black, Shiite worshippers chanted slogans in support of the imam as well as Nasrallah in gender-segregated processions marked by strict organization and security measures by Hezbollah.

Ashura is commemorated by Shiite Muslims as a day of mourning for the martyrdom of Hussein ibn Ali, the grandson of the Islamic Prophet Muhammad at the Battle of Karbala ( 80 KM south of Baghdad , Iraq) on 10 Muharram in the Hijra ( Islamic) year 61 (October 10, 680 AD. Imam Hussein, was reportedly killed by the armies of the caliph Yazid.

Elsewhere in the region

Millions of Iranians, beating themselves with fists and chains, also marked the the day of Ashura on Thursday, a day after a suicide bomber killed 33 people taking part in a procession for Shiite Islam’s most revered mourning ritual.

Iraq arrested 80 Al-Qaeda-linked militants a general said were plotting attacks during Ashura ceremonies in Karbala, where the streets were crowded with 1.5 million pilgrims Thursday.

The arrests underscored fears of violence during the 10-day rituals in the shrine city that culminate on Friday, in a key test for Iraq’s security forces ahead of a complete withdrawal of American troops in a year.

Like their Shi’ite brethren across the Middle East Hundreds of black-clad Shi’ites in the small Gulf town of Qatif, in Saudi Arabia’s oil-rich Eastern Province, rose early to join once-forbidden processions to mark the day of Ashura.

Six suspected suicide bombers were arrested from two places in Pakistan and a huge cache or arms, including suicide jackets, recovered from them, ahead of the processions to mark the day of Ashura in Pakistan.

Brigadier Shahzad, deputy inspector general (DIG) of the Frontier Corps, Thursday said the suspected terrorists were arrested from near the Chaman border while trying to cross over to the Pakistani side from Afghanistan.

“Initial investigations reveal that the suspects wanted to carry out suicide bombings at Ashura processions in Quetta,” he said.

Shiites make up around 15 percent of Muslims worldwide. They represent the majority populations in Iran, Iraq and Bahrain and form significant communities in Afghanistan, Lebanon, Pakistan and Saudi Arabia.