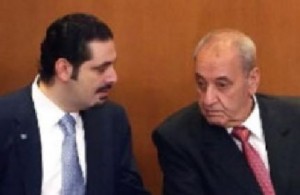 Lebanese Prime Minister Saad Hariri met on Tuesday with Amal MP Ali Hassan Khalil and discussed the latest developments and current efforts regarding the Lebanese impasse, according to the PM’s office.

Khalil according to An Nahar newspaper is promoting a proposal that was devised by Amal movement leader Speaker Nabih Berri to reach a compromise on the false witnesses’ issue prior to the cabinet meeting on Wednesday.

According to An-Nahar newspaper Berri proposed that the “false witnesses file” be considered as part of the case of former Prime Minister Rafik Hariri’s 2005 assassination which was referred to the Judicial Council before the Special Tribunal for Lebanon got involved and therefore there is no need for a new cabinet decree to transfer the matter to the Justice Council and no need to discuss the issue in the Cabinet.

According to Berri’s proposal, it would be then up to the judicial Council itself to decide whether it has jurisdiction in the matter, or not the source told an Nahar

Following the meeting with Hariri , Khalil refused to issue any statements and said “we are resuming discussions, and positive perpetrations are ongoing.”

Voice of Lebanon (VOL) reported on Tuesday that Prime Minister Saad Hariri has his own compromise plan which he relayed to Berri through Khalil to resolve the “false witnesses” controversy.

Hariri’s plan calls for establishing a judicial commission consisting of six judges including two judges to be suggested by Justice Minister Ibrahim Najjar and tasking it with studying the “false witnesses” issue and suggesting a suitable solution to the matter, according to VOL

The cabinet has been called for a meeting on Wednesday at the Presidential Palace in Baabda with the “false witnesses file” as the first item on the session’s agenda. This will be the first meeting since the November 10 session, during which the discussion of the controversial false witnesses issue was postponed to avoid a divisive vote. the regular judiciary should handle the matter.

Murr said on December 9that he will not participate in an upcoming cabinet session unless its agenda includes an article on penalizing parties that incite sedition in Lebanon.

Hezbollah-led March 8 alliance has called on the cabinet to ask the Judicial Council to investigate the issue of witnesses who gave unreliable testimonies to the international probe into the late PM Rafik Hariri’s 2005 murder. However, March 14 alliance is convinced that the regular judiciary should be able handle the matter.