Iran’s president abruptly fired his foreign minister Monday and named the nuclear chief as acting top diplomat, the latest sign of a rift at the top levels of the Islamic theocracy as the country faces intense pressure from the West over its nuclear program.

President Mahmoud Ahmadinejad gave no explanation for the change in a brief statement on his website. But the fired diplomat, Manouchehr Mottaki, is seen as close to Supreme Leader Ayatollah Ali Khamenei. And the president may be aiming to install a figure more personally loyal to himself as Tehran resumes critical talks with world powers over the nuclear program that has brought four rounds of U.N. sanctions on Iran.

The nuclear chief, Ali Akbar Salehi, is one of Ahmadinejad’s 12 vice presidents.

“This move shows not only the internal tensions but the primacy of the nuclear issue as Iran’s main foreign policy objective,” said Rasool Nafisi, an expert on Iranian affairs at Strayer University in Virginia.

Just a week before the shake-up, Iran resumed negotiations with six world powers over its suspect nuclear program after a long hiatus and another round is planned for early next year. Four sets of U.N. sanctions appear to be biting into the Iranian economy and Ahmadinejad may be looking for a loyal foreign minister who will help him clinch a deal with the six powers to ease the punitive measures.

Mottaki, foreign minister since 2005, was fired in the middle of a tour of African nations that took him to Senegal, where he delivered a message from Ahmadinejad to the West African nation’s leaders on Monday, according to the official IRNA news agency.

Mottaki made no immediate public comment on his dismissal.

A fourth round of sanctions was imposed in June over Iran’s refusal to halt uranium enrichment, a key part of its nuclear program that is of international concern because it can be used both for making reactor fuel and atomic weapons. Iran insists its aims are entirely peaceful, but the U.N.’s International Atomic Energy Agency says its years of investigating have not been able to confirm that.

The sanctions are making it more difficult for Iran to trade with the outside world.

The president of Iran’s chamber of commerce, Mohammad Nahavandian, said last month that import prices for most goods have risen by 15 to 30 percent because of sanctions. That is because companies, particularly Asian firms, are bumping up prices because they know Iran is now a desperate market and insurance is difficult – if not impossible – to obtain on shipments to Iran.

And many European firms avoid dealings with Iran or their banks refrain from transactions with Iran.

Some of the tensions between Ahmadinejad and Mottaki have spilled out into public in this closely guarded nation.

In the past year, Mottaki opposed a decision by Ahmadinejad to appoint his own special foreign envoys to key areas such as the Middle East, Afghanistan and the Caspian Sea region. Mottaki found the appointments embarrassing to the Foreign Ministry and allegedly took his complaint to the supreme leader. Khamenei has final say in all state matters in Iran. He also runs the nuclear program and stands at the top of the clerical leadership that rules the country.

Khamenei reportedly sided with Mottaki, forcing Ahmadinejad to moderate his position and change their title only to the level of advisers.

The difference was exposed in September when Mottaki publicly attacked Mohammad Baghaei, one of the four trusted foreign policy envoys appointed by Ahmadinejad, calling him an “inexperienced” figure who was “creating problems for the country’s foreign policy.” Mottaki overtly said that parallel foreign policy work must be avoided, a clear reference to Ahmadinejad appointees who operated outside the Foreign Ministry.

Iranian media have also reported in the past year that some lawmakers were pushing for Mottaki to be dismissed, arguing that he failed to adequately defend Iran at international organizations such as the United Nations.

Mottaki’s dismissal also amounted to a show of force by Ahmadinejad as he battles with rivals within Iran’s conservative camp – a split that grew during the turmoil sparked by his disputed re-election a year and a half ago. Mottaki has been an ally of one of those critics, parliament speaker Ali Larijani, who accuses the president of overstepping his bounds and seeking to cut parliament and others out of key decisions.

Mottaki was a backer of Larijani’s presidential campaign in the 2005 election, which Ahmadinejad won. Nonetheless, he became Ahmadinejad’s foreign minister. 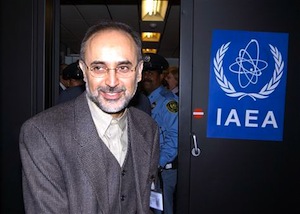 It was not immediately clear how long Salehi – who holds a doctorate in nuclear physics from Massachusetts Institute of Technology (MIT) in the U.S. – would remain in the caretaker role. The semiofficial Fars news agency said Mohammad Ghannadi, a prominent nuclear scientist, is expected to replace Salehi as the new nuclear chief – an indication Ahmadinejad wants him to keep the job permanently. Ghannadi is currently Salehi’s deputy at the Atomic Energy Organization of Iran.

Salehi – or any other candidate – has to win a vote of confidence from the 290-seat parliament to be appointed to the job.

Prominent conservative lawmaker Alaeddin Boroujerdi says he was stunned to hear the news, saying the parliament was not aware of Ahmadinejad’s decision to dismiss Mottaki, according to khabaronline.ir news website.

The president thanked Mottaki for his more than five years of service – spanning Ahmadinejad’s entire time in office.

U.S. Secretary of State Hillary Rodham Clinton said she did not expect Mottaki’s dismissal to affect the nuclear talks, which should continue regardless of the officials involved.

“Our relationship with Iran is not toward any one individual,” Clinton said during a visit to Canada. “It is toward the country, the government, which is complex and challenging to deal with because it is not just one channel, there are several channels because of the way their government is established.”

The next round of talks between Iran and the five permanent U.N. Security Council members – the U.S., Britain, France, Russia and China – as well as Germany is scheduled for January.