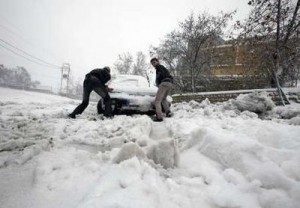 National News Agency (NNA) reported on Sunday that roads in the Shouf have been blocked by snow, and added that only cars equipped with tire chains are allowed to drive on these roads.

There is no power in some of the Shouf towns, the NNA also reported , adding that Electricité du Liban is working on resolving this issue.

Concerning the Lebanese-Syrian Border at Masnaa, only SUVs and cars equipped with tire chains are allowed to drive the road, the statement added.

The NNA added that bulldozers are working on removing the snow from the road.

Roads in Bhamdoun a Sofar are also reportedly blocked because of the heavy snowfall.

Photo: Residents try to push their car during a snow storm along the main highway linking Beirut to Damascus, near Sawfar village in eastern Lebanon,