Syrian envoy is not pessimistic about Lebanon situation 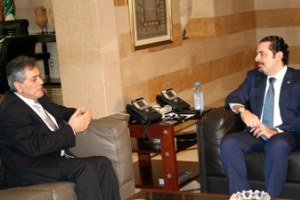 Syrian Ambassador to Lebanon Ali Abdel Karim Ali said following a meeting with Lebanese Prime Minister Saad Hariri at the Grand serial that Damascus is hopeful that the Lebanese parties would resolve their current disputes.

Ali said that there is ongoing communication between the PM and Syria and ” the doors to Damascus are open for Prime Minister Saad Hariri”.

The diplomat also said that he does not believe there will be a crisis in Lebanon after the Special Tribunal for Lebanon (STL) issues its indictment for the 2005 assassination of former PM Rafik Hariri.

“We are not pessimistic about the Lebanese situation .” He added ” Those keen on Lebanon are doing everything in their power to prevent unrest.” He is referring to the Saudi Syrian efforts.

He described as “important” his meeting with Hariri, adding that they discussed Lebanese-Syrian ties.